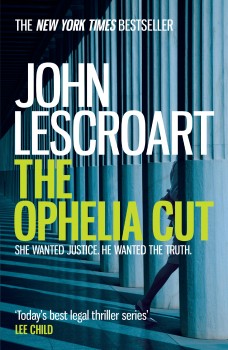 When a rapist is bludgeoned to death, the father of the girl is the obvious culprit, but several people will be uncomfortable if he is convicted.

Rick Jessop, a young man with political aspirations, dates Brittany McGuire. She seeks to end the relationship and he drugs and rapes her. So when Rick is discovered bludgeoned to death, her father Moses, who has previously had an altercation with Rick, is the prime suspect.

There are other candidates: Rick was blackmailing his boss, he was upsetting a wealthy Asian with a chain of massage parlours, and Brittany had caught the eye of Tony, a man under federal witness protection after arrest for multiple homicides.

Moses McGuire’s lawyer Dismas Hardy is only one of a group of friends who some six years ago were complicit in a shoot-out with criminals and the disposal of their remains. The group are all aware that Moses is an alcoholic, and if put under pressure may reveal details of the event, which makes a successful outcome of his trial a matter of great importance to them all.

The core of The Ophelia Cut is the process of the arrest and trial of Moses McGuire, and John Lescroart gives enough detail to show that he is familiar with police and court procedure in San Francisco, and to explore some recurrent themes of such cases, such as the problems which can arise with witness identification.

This is interesting in a general sense, but such matters become of real interest only when they are germane to the case in point, and here they are not. Moreover, the revelations in the course of the case are of only minor importance. Hardy begins his case with little confidence but in hope that something will turn up; something does, but something so unexpected that the reader can feel somewhat cheated.

Lescroart says in his acknowledgements that the book started as a different story and was re-cast when the original plot didn’t work too well. It appears he left in too much of the original and as a result the book is over-long with plot elements inadequately incorporated.

The book begins with Tony’s earlier induction into federal witness protection, suggesting he will play a leading role; in practice he proves to be a bit-part player. The six-year-old shoot-out about which the leading characters are supposedly so concerned is often referred to but, tantalisingly, never properly explained. And at the beginning a variety of characters take turns in giving their section of the story, although once we get to the trial, the action is seen almost exclusively through Hardy’s eyes. All this detracts from the balance of the book and disrupts the continuity.

Despite its considerable length, The Ophelia Cut does hold interest to the end and fans of legal thrillers may want to give it a try, particularly those who liked Lescroart’s previous 23 books. However, to match the quality of Scott Turow, for example, who sets the standard for courtroom drama, more disciplined plotting is essential.