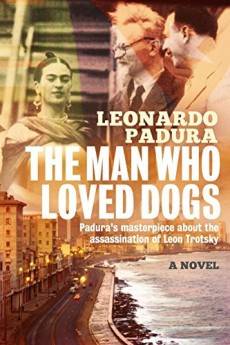 The Man Who Loved Dogs

A Cuban writer meets a man with two Russian wolfhounds while walking on a beach. He gradually learns the man’s story – he is the exiled killer of Leon Trotsky.

If you’ve come across Leonardo Padura before, it will probably be as the creator of the detective Mario Conde series, beautifully written stories without a great deal of action but a healthy dose of social criticism. This, as they say, is entirely different.

His subject is one of the seminal events of the last century – the isolation, demonisation and eventual murder of one of the moving minds of the Communist revolution which went hand-in-hand with the corruption and destruction of the idealistic workers’ paradise he sought to create.

This story of the death of Leon Trotsky at the hands of a Russian-influenced Spanish Communist in Mexico in 1940 may not stick strictly to historical fact, but with its massive breadth and scope it is a masterpiece. Stretching majestically across three continents and more than 60 years, this enthralling tale of intrigue provides a unique overview of one of history’s turning points.

The shape of this remarkable work – the alternating, never quite synchronised, stories of Trotsky, his assassin Ramón Mercader and Padura’s alter ego, the Cuban writer Iván Cárdenas, who meets Mercader with his Russian wolfhounds on a beach – manages to keep interest alive in what can at times be a slow narrative.

What makes it remarkable is Padura’s ability to switch styles. The moral lives of his Russian characters are examined with almost Dostoyevskyan thoroughness together with Tolstoy’s weakness for detail, while his Spanish/Cuban subjects reflect their more emotional make-up.
One of the major problems with historical fiction is that we never know what the protagonists really said. But Padura uses material directly from Trotsky – largely from his Testament – from interviews or writings of his wife Natalia Sedova, secretary Joseph Hansen, and Sylvia Ageloff, seduced by Mercader as cover for his plan.

This massive story of political betrayal grips from the start. The development of Mercader’s character, part hesitant and questioning of those directing him, is a masterpiece of corrupted ideology.

It is an impressive analysis of the contradictions and destruction of the Communist revolution. The brooding character of the dictator Stalin looms over it all, with those around him blinded by fear or ideology, unable to recognise the vast scale of human suffering he manufactured. But Trotsky, who sees himself as a victim, was also an executioner on a massive scale.

Although the internationalism he preached is more alive in Cuba than other Communist states, Padura is brave in his portryal of his home, painting a damning picture of the poverty and desparation of Castro’s paradise after the Russians abandoned it with the advent of perestroika.

The Man Who Loved Dogs is long and slow. It doesn’t pretend to be a dramatisation of historical facts, but sticks closely enough to make it utterly realistic. This is a major work which more than repays the effort it takes to read it.