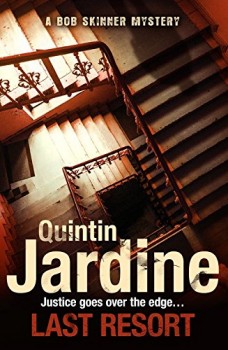 I feel vaguely cheated. There, I’ve said it! I’ve been following the Bob Skinner books almost from the beginning, and this is now book 25 in the series charting his rise from Detective Chief Superintendent to the very top of the policing tree in Scotland. Except that’s not quite how his career has turned out.

It seems that Big Bob has let principles get in the way of ambition – and this reader’s expectations. He’s taking some time away from the job to decide what to do next with his life. Much to my surprise, even knowing he hated the very idea of a unified police force in Scotland, Skinner has withdrawn his application for the top job and stood aside in favour of his old friend and protégé, Andy Martin.

Skinner has taken himself off to his place in Spain to recharge his batteries and do some serious thinking. He needs to decide if this really is the end of the road for him in the job that’s been his life for so long, or whether he’ll accept some sort of role as his old friend’s henchman, or whether he’ll take one of the many non-executive directorships he’s been offered, or even a role within MI5 that’s on offer. Decisions, decisions.

In the meantime, an old friend approaches Skinner and asks for his advice on the disappearance of a vital employee from his newspaper business in Spain. Naturally, he agrees. At the same time, Skinner becomes aware of the fact that someone is following his movements rather to closely for comfort, and he’s concerned that this might tie up in some way with his latest complication: the illegitimate son he’s only recently become aware of, who’s now in prison for the killing of his grandmother. Confused? Oh, do keep up, this is by no means as complicated as Skinner’s life is capable of getting.

Last Resort is another of Quintin Jardine’s occasional forays into writing mostly in the first person from Skinner’s point of view. The main plot is interspersed with another first person narrative, this time from Skinner’s eldest daughter, Alex, who’s having a life crisis of her own. She’s decided to chuck in her career as a high-flying commercial lawyer for the more itinerant life of a criminal law practitioner, and her relationship with the equally career-orientated Andy Martin looks like it’s heading for the rocks – again. No surprises there, then.

While I’m in confessional mode, I’ll also throw in that I’ve never been much of a fan of Alex. Like her father, she’s driven, intellectually arrogant and a bit of a bully. And to cap it all, the first person narratives just don’t really work for me in this context, particularly Skinner’s. The ‘voice’ just doesn’t gel with the mental image I have of the big man. It’s not him, which I guess is a testament to how well Jardine has fixed his main character in my mind, and that comment is very definitely not an attempt to damn with faint praise.

One of my problems with the decision to stick entirely with two narrators is that it cuts out one of the aspects of the Skinner books that I’ve always liked the most, the vast, sprawling cast of characters that has always added so much extra depth to the series. Yes, there are appearances by some old friends like Jack McGurk, but they’re relatively fleeting.

Instead, there’s a faintly ridiculous sequence where Alex blags herself an appointment with a literary agent on the basis of one simpering phone call and then shamelessly contaminates a crime scene in a way that should have seen her cooling her shapely heels in a police cell, rather than just getting away with a pat on the head for her cleverness. Her father does a fair amount of crime scene contamination as well, so it clearly runs in the family.

For all that, I did enjoy the book, and I’m clearly still hopelessly caught up in Skinner’s soap opera of a life. If I wasn’t, I would probably have just shrugged and moved on. But I still want to see what direction the man takes next, even though I have a sneaking suspicion that it will irritate the hell out of me.