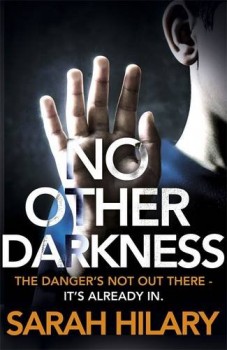 DI Marnie Rome and DS Noah Jake are faced with a sinister case of discovering who left two young boys to die in an underground bunker in a back garden.

Sarah Hilary’s debut novel, Someone Else’s Skin proved that she was indeed a winner at getting under her characters’ skins. And her second outing for DI Marnie Rome reinforces just how she strips them down and shows what makes them tick.

On the surface, you may be forgiven for thinking that these are just bog-standard police procedurals with a lead character carrying enough personal baggage to sink the Titanic. But this series repays your time, as Hilary’s strength is also menace and motivation.

Two small boys are in an underground bunker, waiting for someone to rescue them. Except, no one comes. Their bodies turn up five years later after new homes are built on top of the bunker. And it’s a nightmare case for intense DI Marnie Rome and her sidekick DS Noah Jake.
.
Marnie is still preoccupied with the issue of her foster brother, who murdered her parents. Stephen is less to the fore this time around, but some intriguing clues suggest firmly that Hilary has something hidden up her elegant sleeve for this plot line.

No Other Darkness will have you thinking about your relationship with your own family and concluding that it’s probably perfectly sane after all! Aside from Marnie and Stephen, Noah’s Jack-the-lad brother is on the scene looking for favours. And most powerfully, there’s the family who live in the house over the bunker – gardener Terry Boyle, his earth mother wife Beth, their children and wayward foster son Clancy, who seems to know more about the gruesome find than he’s letting on.

Hilary’s attention to detail is scrupulous, and she is at her absolute best when it comes to marshalling a cast of characters – even seemingly walk-on parts are inked in with care. I am still faintly freaked out by the creepy collector neighbour.

The scenes from inside the mystery woman’s head in the secure hospital setting are a tad clumsy at times, and tend to slow the action up. Where No Other Darkness soars is when the characters are on the streets, or angsting over decisions in neon-lit rooms. I found myself resenting any time spent away from Marnie and Noah. These are not your bog-standard police heroes – and Hilary is pushing gently but insistently at the police procedural boundaries.

The location for the finale is signposted some way off, but it’s still a chilling pursuit that you’ll want to read with the lights blazing. And I shall now be very suspicious of cans of peaches …