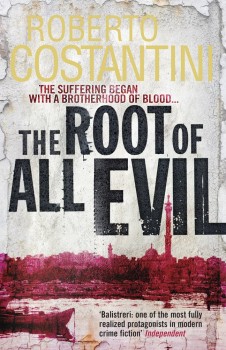 The Root of All Evil

A young Arab girl is murdered in Libya and there appears to be no discernible motive. Thirteen years later an almost identical murder takes place in Rome. Commissario Michele Balistreri knows that the two crimes are connected and that a solution to one will lead to a solution of the other.

To say that The Root of All Evil is about two murders a long time apart and in different countries may be strictly true, but it is a very inadequate statement about a book which runs to more than 600 pages and deals with so many events over a considerable period of time.

This is the second part of Roberto Costantini’s trilogy based in North Africa and Italy. It is part prequel and part sequel to The Deliverance of Evil which introduced Michele Balistreri of the Rome police. That book showed him first as a young detective in the 1980s and then, more than 20 years later, in a very senior position within the Rome police. This one begins with his childhood and upbringing before returning to the beginning of his police career.

By far the best parts of what is a somewhat uneven book are those set in Libya. The Bruseghin-Balistreri family – the parents, Salvatore and Italia, the grandfather, Giuseppe Bruseghin, Michele and elder brother, Alberto – live in idyllic surrounding just outside Tripoli. They own two villas, one of which is let to an American family. Not too far from the villas and close to a cesspit there is a shack in which their servant, Mohammed, lives with his wife, four sons and a daughter. This represents the kind of social order found in the country in the 1970s, with Italian families still retaining the remnants of a privileged position dating back to the time of Mussolini’s North African empire.

As a child, Michele dotes on his mother and his grandfather, both of whom remain influenced by the beliefs of Mussolini, but his relations with his father are at best cool. The wealth of the family is entirely due to his mother’s family, his father having been born into a poor Sicilian family. Even the family home is owned by Giuseppe – a fact of which Salvatore Balistreri is well aware. The children have formed a kind of democracy all of their own and Michele in particular is friendly with the two younger boys in the Al Bakri family, Ahmed and Karim. In fact they form what is almost a gang, including another poor Italian boy, Nico Gerace, whose father runs a filling station.

The first two parts of the book are mainly concerned with the activities of these four as they grow older. They swear that they will always remain friends and indulge in what amounts to almost criminal activity at times as they seek to build up a business. Also contained within this part of the book is the violent murder of Nadia Al Bakri, younger sister of Ahmed and Karim. It appears to be committed by a local and both the Italian and the American families come under suspicion, as well as two other Italians, Emilio Busi and Don Eugenio. Busi is a business contact of Salvatore’s and Don Eugenio the local priest whom the boys dislike and distrust. The murder, however, is unsolved in spite of considerable investigation.

This account of Libya in the 1970s includes the reactions in Libya to the Six Day War in 1967 and also to the coup staged by Muammar Gaddafi in 1969. The two Libyan boys are anxious to join the struggle against Israel, and mange to get to Cairo, only to find that the war is over. However, they seize the opportunity of being in Egypt to further their business interests.

Constantini sees the rise of Gaddafi as part of a plot, not merely by the military, but also by Italian businessmen in Libya who think they will be able to control him. He goes into considerable detail about the plotting and intrigue that he imagines would have been necessary for the success of the coup and, since one of the primary plotters is Salvatore Balistreri, he manages to link this very effectively to the story involving the gang of boys calling itself MANK. We begin to see the potential for violence within the gang and we are not surprised when they begin to fall out.

The part of the story that takes place in Rome initially concerns Commissario Michele Balistreri and his attempts to find the murderer of a young girl, Anita Messi. There are certain aspects of the crime which remind him of the killing of Nadia Al Bakri. His suspicions are increased when he begins to receive letters from an unknown source in Libya, referring to events that occurred there when he was growing up.

At the same time he is trying to fulfil a promise to look out for Claudia Teodori, the daughter of a former superior of his in the police force who has died. This, together with the investigation of the murder, gives the impression of being almost a separate story and might have been better if presented as such. Certainly the attempts to link the two parts by murders carried out in each and to turn the novel into a fairly conventional whodunit on a grand scale are not only unconvincing but also dull and almost impossible for the reader to follow without considerable backtracking. The first two parts of the novel, however, are a powerful evocation of a time in the history of the Middle East, with a story that never fails to hold the reader’s attention.