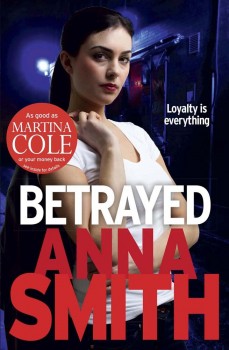 Investigative reporter Rosie Gilmour senses there is more to the fading story of a missing barmaid – and finds herself drawn into the brutal and violent world of Glasgow’s Ulster Volunteer Force.

After 25 years on the Glasgow Record, Anna Smith has seen it all and her keen observation and brilliant presentation make this latest adventure of her heroine, hard-nosed and hot-headed reporter Rosie Gilmour, almost an historical noir story.

It’s absolutely believable in all its blood and brutality – and Smith doesn’t mince her words when describing some of the sickest scenes you’ll come across. The portrayal of her characters, their motivation, misguided loyalties, loves and losses is as realistic as any author writing today.

When the Good Friday Agreement ushered in an era of fragile peace in Ulster in 1998, paramilitaries on both sides of the sectarian divide faced decisions about their future. The IRA split – and split again – the majority following Sinn Fein into a share of government. The larger Unionist Ulster Volunteer Force, for so long the effective rulers of the Protestant strongholds, almost overnight transmuted into criminal gangs as ruthless local leaders paid tribute to its military structure while re-enforcing and extending their own power.

Nowhere was that more true than in Glasgow, where community tensions were paraded twice a year at the Rangers v Celtic matches and kept high by marches, myths, legends and clubs – often the front for UVF activity.

Rosie, back at work after recovering from injuries, senses the disappearance of a barmaid from a notorious Rangers’ pub with rumoured UVF connections may be key to something far bigger.

The murder of two minor drug dealers also appears to be connected – and when she persuades a friend of the missing girl to talk, a major plot to import drugs, using Rangers’ fan trips to European games as cover comes to light.

She tracks the local UVF commander, a thuggish and thoroughly despicable character and his minders, one the boyfriend of the missing barmaid, to Holland and Spain and a dramatic showdown in the ancient city of Seville where she once again puts her life at risk.

If you haven’t come across Rosie yet, this jet-propelled and cleverly plotted story will suck you in from page one and send you searching for her earlier adventures. She’s a dedicated and decidedly stroppy woman with a penchant for going too far and landing in trouble. She’s also bright, brave and surprisingly vulnerable – unable to translate her working personality into her private life.

There’s just one problem. No editor I ever worked for would even think of signing off expenses for a Bosnian killer bodyguard and a former Spanish detective, no matter how good the story! But hey, this is fiction – and this is action fiction at its very best.