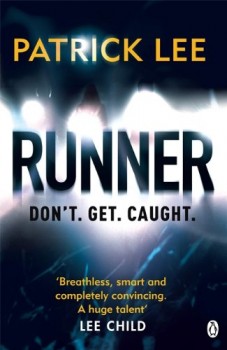 When Sam Dryden encounters a terrified young girl, his natural instinct is to help her, but he never expected the terrifyingly organised and relentless pursuit that immediately follows.

Ex-soldier Sam Dryden has put his past behind him, or so he thinks, but one night is enough to change all that. He suffers badly from insomnia, and so going running on the boardwalk of the beach near his home at 3am is nothing new for him. What is new is encountering a terrified young girl, desperate to escape the men she says are pursuing her.

Even knowing nothing about the girl, Sam’s immediate reaction is to help her. The men following her are well-armed and clearly determined to capture her. The pursuit that follows is relentless and well-organised. But Sam was no ordinary soldier, as his pursuers soon discover. He is hard to capture and even harder to kill.

The girl, Rachel, is only 11 years old, and appears to have been held prisoner and given drugs. She knows the men want to kill her but doesn’t know why. Beyond her immediate circumstances, her memories are gone, seemingly blocked by the drugs. The question is whether Sam can keep her alive long enough for her memories to return.

Runner does very much what its title suggests. The story certainly does hit the ground running and never slackens its pace. I’m a total sucker for well-done pursuit novels and films, and this is up there with the best. Sam and Rachel have to evade the most sophisticated spy satellites the world has ever known, and stay one step ahead of the teams sent out in the field to pin them down. Their pursuers are wholly relentless and equally resourceful, testing Sam’s skills to the limit.

Patrick Lee does a superb job of gradually peeling back the layers of secrecy surrounding Rachel and why she’s so important. Runner is an action-packed techno-thriller that flirts successfully with science fiction whilst always managing to keep its feet firmly on the ground, which is no mean feat. Even when dealing with the wholly impossible, Lee manages to make everything seem entirely plausible.

I was completely engrossed by Sam and Rachel’s battle to evade their pursuers and found it genuinely difficult to put the book down. They’re strong characters and what happens to them very quickly came to matter a lot to me, even during the times when I struggled to disentangle truth from lie.

And for anyone who loves a good chase thriller, this is undoubtedly one of the best.