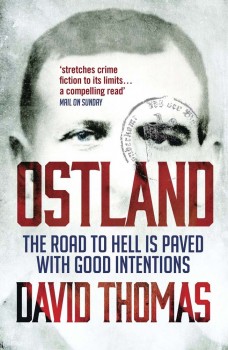 An idealistic young German policeman joins the hunt for a serial killer operating on the Berlin S-Bahn railway. When the investigation comes to a close he is transferred and takes up a position in the German Eastern colonies.

This is not an easy book to classify. Even when it is concerned with the search for a serial killer in Berlin it is much more than the routine crime novel. The very setting guarantees that, not to mention the fact that it is concerned with real people, including Reinhard Heydrich.

Georg Heuser tells the story and the author makes excellent use of the first person to produce a detailed vivid narrative. He is 28 at the beginning of the story and we learn that he had passed the first part of his law examinations and was well on the way to a doctorate. His academic qualifications had then been enhanced by graduating top of his class at the Sicherheistdienst leaders' school. Clearly a very ambitious young man when he joins the police as an Assistant Criminal Commissar, he nevertheless makes the point – and we believe it – that he wanted to serve Germany and help it prosper under its new leader. In other words, his ambition is matched by his idealism.

When he arrives at police headquarters on Alexanderplatz he discovers that his boss, Wilhelm Lüdtke, is attempting to track down a serial killer operating on the S-Bahn. He commits himself entirely to the search, the excitement of which is well communicated to the reader. This police procedural element of the book, which involves bodies of murdered women being found next to the railway line (and which is entirely factual), demands qualities that Heuser possesses in abundance – diligence, patience and a dogged persistence. Of course, the actual part played by Heuser in the case is largely fictionalized for narrative and dramatic purposes.

The second part of the book deals with the time Heuser spends in the Eastern territories of Riga and Minsk when he takes part – willingly or under orders – in the murder of Jews who have been ‘resettled’ in the East. The author’s description of what took place is graphic and not for the squeamish. At this time (1942) the gas trucks used at Chemlo, later superseded by the gas chambers of Auschwitz, did not exist and the method used was simply a bullet in the back of the head.

However, in order to simplify this procedure, pits the size of a modern swimming pool were dug in advance of the ‘operation’, the Jews were lined up on the edge of the pit and simply fell into it when shot, after which their places were taken by another group. One feels that the author is bending over backwards to be fair to Heuser and the frequent self-examination and wrestling with his conscience appear to be based on the defence which he put up in court when eventually tried for war crimes. One has the impression that such objectivity is only possible because of Thomas's decision to tell the story in the first person and as it happened, thus avoiding any commentary.

In the end, of course, it is very much the old story of 'obeying orders', where everybody can point to someone of a higher rank who had to be obeyed. This is particularly so in the case of an officer who had taken an oath to serve Germany and the Fuehrer. There is one conversation with a subordinate where Heuser ends by saying nobody had ever been executed for not being prepared to take his place in the killing line and it is clear that he has strong reservations about what was going on. Never for a moment, however, does he contemplate the possibility of simply refusing to be part of it. Never for a moment does he weigh the importance of his oath against the obvious criminality of the killings.

There is nothing new about these questions and we are left to wonder whether, given the circumstances, we would have acted differently. If an apparently honourable and idealistic young man can be persuaded – not coerced, but simply persuaded – to commit murder on an everyday basis, then presumably anybody can. The one jarring note occurs in Heuser's repeated complaint that he has not received promotion when others have. It is one thing to be involved in mass murder, quite another to expect reward for it.