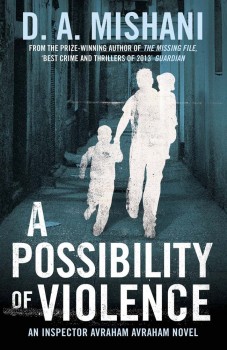 A Possibility of Violence

Inspector Avraham returns to work after a break which followed a difficult case: the errors made continue to haunt him and affect his approach to new enquiries.

Israeli Inspector Avraham Avraham was first featured in The Missing File, where the disappearance of a child was not rigorously followed up, leading to an inability to fully prosecute the guilty. He remains especially sensitive to cases involving parents and children, so when the family background information provided by suspect Chaim Sara shows some odd features, Avi insists on getting to the bottom of the matter.

The problem with this is that the primary investigation to which he is assigned is a threat against a nursery school operator, where a fake bomb was left outside the premises, and the Commander of the District Investigation Branch Ilana feels that his obsession with the closed case is proving a distraction.

Sara, who was pulled in as he had an altercation with the school operator, is quickly eliminated from that investigation, and Ilana thinks further scrutiny unwarranted. But Avi is determined, and ploughs his own furrow without informing Ilana of his activity.

This book follows naturally on from its predecessor, not only because of the significance the case continues to have with the protagonist, but also because the strains of that investigation provide a clue to his relationship with Ilana, and other colleagues. So much of the old case is reprised here, however, that the reader is not seriously disadvantaged coming to fresh to this book.

It is often interesting to read crime fiction set in foreign jurisdictions written by natives, or those well-informed, for the insight given into both the country and the way that the police organisations operate. Unfortunately, we don’t get a great deal of flavour here: there is a mention that Jews who wish to marry non-Jews have to marry out of Israel, which is interesting, and the occasional mention of religious holidays, but that aside both the police investigation and the setting could without much alteration be set in the UK or USA.

Avraham himself is an appealing character, painstaking, driven, self-critical and prone to strong emotions, held well under control. The chain-smoking is an attribute that seems to fit; in the last book he drank as well, but seems to have cut down since. The suspect Chaim Sara is also an interesting portrait, worthy of note since so much of the book follows his activities. The thinking of the dysfunctional is always a challenge to convey, and the author here has provided a believable study.

All in all this is quality stuff, a procedural with some interesting twists and sophisticated psychological insights. The story makes a satisfactory arc to completion, and the translation reads well. I could certainly read more.