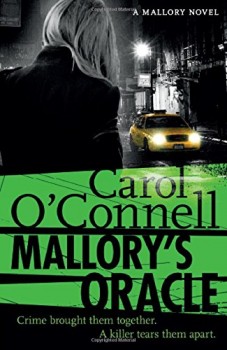 When child thief Kathy Mallory was rescued from the streets by Sergeant Louis Markowitz, he and his wife reshaped her life. When he is butchered, Mallory, now a detective herself, sets out to trap his killer.

America, as all crime story reviewers know, is divided into four types of people. Serial killers; their victims; mentally tortured detectives; and assorted others to provide red herrings or background colour. This mob of murderous monsters, distinguished only by ever-increasing numbers of victims – in some cases unbelievable hundreds – tends to leave a reviewer considering a cull of his own.

One who will be exempt is Carol O’Connell, her saving grace a totally different and quite fascinating detective, now 20 years and 11 books into her series, who is being re-introduced to British readers.

Sergeant Kathleen Mallory is the Dirty Harriet of the computer age – albeit a great deal more beautiful than her alter ego. A New York street child thief, caught and brought up by a not very Jewish detective and his devoted and very Jewish wife, she has absorbed much of their training, but retained the amoral attitudes of her youth, which allied to her intelliegnce and obsessiveness, make her a fearsome crime fighter who operates largely by her own rules.

When her ‘father’ is killed while pursuing a killer who targets rich old women from New York’s ultra-wealthy and respectable Gramercy Square area, she launches a personal –and frequently illegal – search for the murderer. She enters a world of old money and all the oddities it can cover. It’s a world of illusion and magic where anything is possible – and a world of manipulation, evil and greed where already rich people play the system for millions of dollars more.

O’Connell writes vividly and with passion. She’s constructed an absolutely brilliant, plot which takes standard detective fiction and stands it on its head. She also knows how to shock, without ever using it gratuitously and she has a superb eye for characters, from the rumpled New York detectives to starchy Daughters of the American Revolution.

Mallory is cold, calculating, amoral and driven, but beneath all that there is still a genuine hint of softness and like Inspector Harry Callahan she is not quite the ruthless human being she likes to make out and never steps over the line her analytical mind has set for herself.
This book has everything a crime novel needs – a first class and near impenetrable plot, great characters who suck you in to their lives and feelings, plus a surprising amount of social comment.

It looks as if the publishers are about to re-run the whole series, so if you haven’t had a chance to catch O’Connell’s brilliant creation before, get in now at the start. Who knows, she might even give serial killer stories a good name!