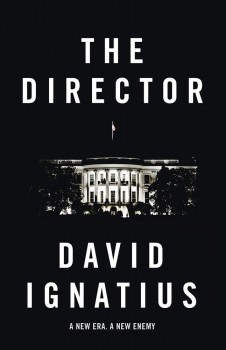 Post WikiLeaks and Edward Snowden, the CIA is fast losing credibility. The president appoints as CIA Director Graham Weber, a wealthy businessman and a member of the President’s Intelligence Advisory Board, with full authority to make any changes he considers necessary,

Post WikiLeaks and Edward Snowden, the CIA is fast losing credibility. The president appoints as CIA Director Graham Weber, a wealthy businessman and a member of the President’s Intelligence Advisory Board, with full authority to make any changes he considers necessary,

Having made himself somewhat unpopular by removing from the CIA lobby the statue of its founder, William J Donavan, in an effort to bring the Company into the 21st Century, Weber knows that it is now up to him to convince the staff that he is fit to be in charge. Something happens almost immediately, however, to make him stop and think about what he has taken on. He finds in his desk a sheet of paper containing a quotation from Cicero about the nature of treachery, and, even though there is no evidence to suggest that there is a traitor within the CIA, he can’t get the idea out of his mind.

One of his first actions is to make use of the services of James Morris, whom he had first met at a conference about a year before. Morris, an absolute computer genius, is employed by the CIA as head of its Information Operations Centre. Weber has been informed that a young Swiss boy had walked into the US Consulate in Hamburg claiming to have information vital to the government of the United States, which he would disclose only to the Director of the CIA. He would give no further details, other than to say that he was a computer hacker and was able to produce evidence indicating infiltration of the CIA computer system. Weber orders Morris to get the boy out of Hamburg and bring him clandestinely to Washington. What he does not know is that Morris is an idealistic man who is subject to other influences.

In his acknowledgements at the end of the book the author says that spy novels are increasingly concerned with computer code and hacking and that, since he wanted to go down this road, he had to consult experts who were willing to share information and ideas. This is a revealing remark because it is very clear that he has undertaken a considerable amount of research to produce the book. Unfortunately, it cannot be said that the research fits altogether seamlessly into the plot, which is frequently littered with computer-speak. Whilst it may be scientifically accurate, is also difficult to understand.

As with novels based on complicated financial transactions, it is possible for the reader to carry on through it providing the plot itself is sufficiently absorbing. Unfortunately, in this case the plot for the central part of the book is almost entirely computer hacking, with long descriptions of the technique required to achieve it. This is a pity because the book begins very promisingly and has a gripping last third, in which the bad guys are exposed and brought to justice.

The other weakness concerns the characterisation. There is more detail given of James Morris than of any other character but he is not consistently portrayed. Initially he is a computer expert devoted to his job, with no suggestion that he is anything other than a loyal employee. It is a little difficult to believe that an old university friend can have such an influence on him that he decides to disappear and to follow his own illegal agenda so completely.

Even the Director himself is a fairly insubstantial figure. He is said to be hugely wealthy, divorced with children, but little else. There is no sign of the qualities that led to his being appointed to run the CIA. Considering the book is called The Director it’s not unreasonable to expect a little more attention to be paid to defining him. In fact, the only really convincing character is Cyril Hoffman, the Director of National Intelligence. There is a certain depth to him and in a dramatisation of the book he would have the opportunity to act everybody else off the stage.

The revelation early on that there is a traitor within the organisation - an allegation that is repeated later - has the effect of keeping us reading up to the end. Not only do we want to know who that is, but also who is providing the information. In fact, the ending is so well done that it makes up for a lot of what has gone before, simply because the author is at last telling his story. Whatever theories one may hold about the changing nature of spy fiction and what it will look like in future, it is still essential to provide a convincing storyline and to tell it in a way that will hold the reader’s attention.