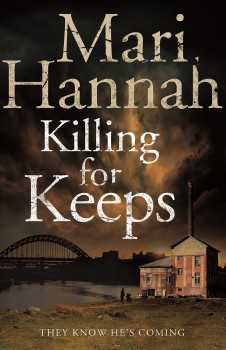 DCI Kate Daniels is back, investigating two of the most brutal killings she’s ever had the misfortune to encounter. Two brothers from the same family of career criminals have been horrifically tortured to death, one strapped underneath a car and driven at speed through a Newcastle industrial estate, the other mutilated and dumped in a busy A&E department, unnoticed by the harassed staff.

There are quite a few contenders for the most-likely-to-have-wanted-them-dead prize, and it’s up to Kate Daniels and her team to narrow down the field. She’s under pressure from the media and her bosses, and for once, Kate isn’t coping very well.

She’s still pretty deeply in the closest about her sexual orientation and only her two closest colleagues, Chief Superintendent Phillip Bright and DS Hank Gormley, know about her on-off relationship with psychologist Jo Soulsby. Things are definitely getting to Kate and she starts to unravel after getting wrong-footed by a journalist in a press conference.

There’s very definitely a more vulnerable side to the hard-edged DCI on show here and at times, Kate’s vulnerability makes for uncomfortable viewing as her creator takes her into very deep waters.

Mari Hannah peoples the Northumberland crime scene with strong characters on both sides of the law, and there are times when it’s difficult to know who you should be rooting for, with shades of grey everywhere you look. Kate and Hank get into some extremely murky waters as their pursuit of those who killed the Allen brothers takes them out of their comfort zone and very definitely out of their jurisdiction.

Killing For Keeps is dark in tone, with some scenes that need a fairly strong stomach, and as a dog lover, I’d really like to put in a plea in defence of Rottweilers for the future. These loyal, intelligent dogs really have become the punch-bags of crime writers, and it would be nice to see them get the break they so richly deserve.

That aside, for those who’ve followed Kate Daniel’s career, this is a must-read instalment, and for those who don’t know her, you have a treat in store. If this doesn’t make you want to go back and read Hannah’s back-catalogue, I’ll be very surprised indeed.