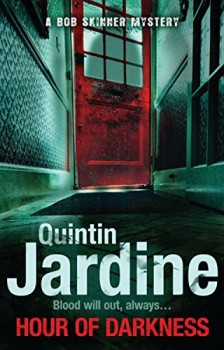 The naked and mutilated body of a woman is found washed up on Cramond Island near Edinburgh. She’s been badly cut up by a ship’s propeller but that certainly didn’t stab her six times in the chest with a knife, so there’s no doubt in the mind of pathologist Dr Sarah Grace that someone’s been up to no good. I had to struggle hard against the desire to announce that there had been a murrrderr, rolling my r’s in best Taggart fashion.

The police have no idea about the identity of the body and remain baffled until a woman is found to be missing from a blood-stained Edinburgh flat. But although they now have a name for their corpse, there seems to be nothing by way of a motive for the killing.

At the same time, unpopular copper Detective Superintendent David Mackenzie goes missing after being on the receiving end of a bollocking from his senior officer, the no-nonsense and occasionally volatile Mario Maguire. Mackenzie’s fellow officers think he’s gone off in a strop and is licking his wounds. ‘Bandit’, as he used to be known, isn’t a man who takes criticism lightly, or even at all. The problem is made worse by the fact that Mackenzie’s wife has disappeared as well, failing to pick their children up from her mother. There’s some blood in their home too, and a duvet is missing off the bed.

Skinner is left wondering how big a mistake he might have made in putting Mackenzie into a senior role after his breakdown, and starts his own enquiries into the man he’s done his best to provide with a second chance. As ever, in the labyrinthine world of Scottish policing that Quintin Jardine has built up over two decades and 24 books, there are enough interconnected strands running around the place to weave a good-sized tartan blanket. It helps to know the background to the characters, but if not, there’s enough in-text exposition – often somewhat clunky – to provide a very necessary glossary.

Parts of Hour of Darkness are told in the first person, by Strathclyde’s newly-appointed and still somewhat reluctant Chief Constable, the big man himself, Bob Skinner. To be quite honest, much as I love the books, the parts told by Skinner himself don’t quite work for me. They seem somewhat forced and, if anything, give me less of a mental picture of Skinner than I get in the other sections told from a variety of different points of view, but maybe this is just because ‘this’ Skinner doesn’t quite match up to the picture of ‘my’ Skinner that I’ve built up over the years. I’d be fascinated to discover how other readers feel about these occasional departures from the norm.

My only other criticism is that on this occasion, despite the frequent internal exposition, Jardine seems to have developed a lamentable habit of over-using descriptors in text, so the chapters are splattered with references to ‘the DS’ and ‘the DI’ and it very rapidly becomes exceptionally confusing, even for someone like me who’s avidly followed the careers of all the characters, and I got a bit fed up of trying to work out who was speaking.

That notwithstanding, I still found Skinner’s latest outing as fascinating as ever, and I was deeply caught up in the mystery surrounding Mackenzie’s disappearance and the unfolding story of Scotland’s criminal underbelly. There was even a brief appearance by old friend Lennie Prendergast. Maybe one day I’ll get my wish to see Lennie acting as an official consultant to the man who put him inside.

I can’t wait for Skinner to get his feet under the table of the top job in the soon-to-be-formed Police Scotland. The burning question in my mind is whether he’ll ever get to buy a boat and retire, or whether he’ll have a heart attack and die in office! I have a huge soft spot for the still-maverick and always entertaining copper, and there’s plenty of life left in this particular old dog.