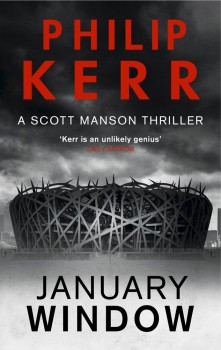 Scott Manson is coach at Premiership football team London City. But he finds himself investigating murder when the manager is found dead.

There’s not much of a roll-call of decent sporting murder mysteries that aren’t set on a racecourse – let us gloss briskly over Testkill and They Used to Play on Grass (both written by former sporting insiders – England cricketer Ted Dexter and football manager Terry Venables, respectively, with the aid of co-writers). So Philip Kerr might just have found himself a gap in the market.

Kerr’s love of football (soccer to our American friends) leaps off the page, rants about the state of the sport included! And there are issues galore crammed into the book, including gay footballers, overpaid players, the dearth of black managers (his hero is mixed race) and Russian oligarchs.

For those of you not such keen followers of the round ball game, January Window refers to the transfer period at the start of the year when football clubs buy and sell players like it’s going out of fashion.

And there’s plenty of action at Premiership club London City, where Scott Manson is coach. Their ambitious Russian owner and outspoken manager mean they’re never far from the front pages of the papers. But it’s usually for footballing or finance matters, and not because the manager has just been bumped off.

Dislike and distrust of the police by most of the main characters gets Scott investigating. He has a degree, is articulate and speaks several languages. But you may well wonder whether someone in his job would have the time to do the plods’ job for them, no matter the amount of distrust on both sides. Scott has good reason to mistrust the police himself, but even so …

January Window is a faintly disconcerting blend of fact and fiction with real teams and people interwoven with the mythical London City club and its cast. I’m one of those readers who really isn’t sure about real people in supporting roles in novels. And it tends in places – particularly the first few pages - to information dumping, where Kerr seems to realise that not all his readers will be experts on the minutiae of Premiership and world football.

That said, I enjoyed it, although I suspect others’ mileage will vary considerably, depending on your love of the so-called beautiful game. And you can never accuse Philip Kerr of standing still, given his previous books include a raft of thrillers and the excellent Bernie Gunther series. January Window is straight out of the back pages of newspapers and a page-turner, if not of Premiership quality, certainly more than a tad higher than the Conference!

PS: It’s another entry for the WPC hall of shame, though. Grrr!