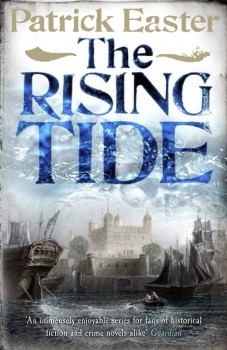 Tom Pascoe is drinking himself to death grieving for his murdered wife. His last chance to save his job with the River Police is to investigate the death of an MP found floating in the Thames. His inquiries leads to a ruthless ring of slavers determined to preserve their trade at any price – even treason.

River surveyor Tom Pascoe returns for the third of Patrick Easter’s evocative series set in Georgian London. The former naval officer works a three-and-a-half mile stretch of the Thames from the Pool to Greenwich as one of the senior officers of the Marine police – the world’s first professional force – formed to deal with the huge amounts of crime generated by the port of London.

The year is 1799. Prime Minister William Pitt is attempting to deal with the aftermath of the war with America, conduct operations against Napoleon’s France, cope with revolt in Ireland, the possibility of a Scottish rising and civil unrest throughout England. At the same time, prompted by abolitionists such as William Wilberforce, he is also trying to force through anti-slavery legislation.

But many of the most influential men in Parliament and the country have a vested interest in preventing a change which would destroy their source of wealth and some are prepared to go to almost any lengths – including murder or treason – to stop it.

Pascoe, almost broken by the loss of his murdered wife, has become increasingly belligerent and unpredictable as he drinks himself into oblivion. Almost as a last chance he is tasked with the investigation of an MP’s body found in the Thames.

When a second politician, this time a close associate of Pitt, is found dead in similar circumstances, his bosses doubt he is up to the task. But Tom has found the motivation he needs – the marks of a garrotte on the men’s throats of a similar pattern to the one that killed his wife.

The story runs as fast as a rip tide, peopled with runaway slaves, informers, thieves, bully boys and hot-tempered and corrupt aristocrats as Pascoe closes in on both the case – and his revenge – but it is London and the Thames which provides such a dramatic framework.

Easter’s historical research is second to none. Many of his key characters are his interpretation of real people doing real jobs. Others are solidly based on reality. Somehow he makes it all come so alive that you can smell and feel the filthy water of the Pool or the sordid and violent drinkers and back streets of Southwark or Wapping.

Even the wonderfully described bare-knuckle championship of England when middleweight Jem Belcher took just 20 minutes to wrest the title from heavyweight Jack Bartholomew, less than a year after fighting a 51-round draw with the older man – Easter has shifted the date to provide a dramatic setting for part of his plot – does not appear out of place.

Everything about the Pascoe series carries the ring of truth: motivation, dialogue, settings, even the often violent action.

When you have spent part of your 30 years police service operating out of the same station – Wapping Steps – as your hero, doing the same job under some of the same circumstances and pressures, you must get a feel for the man you want portray. Easter certainly has.