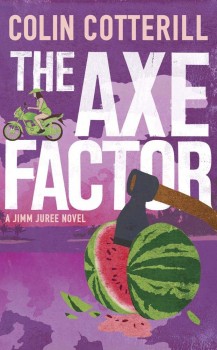 Jimm Juree, an attractive ex-journalist, is sent to interview a British writer in his house in Thailand. His apparent obsession with axes is worrying especially when Jimm learns that his first wife has disappeared. What follows is completely unpredictable.

Jimm Juree, an attractive one-time journalist, is sent to interview a British writer in his house in Thailand. She soon appreciates the writer’s charm, but wonders what happened to his wife. His live-in maid warns her off him and Jimm subsequently receives some vicious, potentially deadly threats. Meanwhile a local doctor disappears.

Jimm, her grandfather and brother have followed their eccentric mother to the south of Thailand to run a spectacularly unsuccessful beach resort complex and to try to clarify the circumstances by which a man called Captain Kow is said to be their father. Starting from the basis of this dysfunctional family, the story grows organically, mixing developments between Jimm and the writer, e-mails to Clint Eastwood, and happenings at the local hospital, until eventually a main focus emerges. The loose mixture of all the different strands helps to create the wonderful, crazy, unpredictable atmosphere of the book. Indeed the most relevant theme only becomes apparent in the final few chapters.

The idiosyncratic characters give rise to much laugh out loud humour. Images are conjured up such as grandfather without his shirt looking like “a stack of CDs draped in damp tissue paper”; mother planting potatoes on the beach because they always need salt and water; and lieutenant Chompu, the gay policeman who refuses to restrain his feminine side and consequently is being “forced to undergo some Mekhong whiskey therapy."

These bizarre characters also give rise to a great deal of funny but realistic dialogue with many off-the-wall flights of fancy. It turns everyday life into an ongoing comedy with dialogue that often just makes one’s own thoughts explicit.

The only time the humour stops is when the story moves into the territory of a major current issue. The issue in this book is about the promotion, by a large multinational company, of baby milk formula rather than breast-feeding. Spelling it out in a straightforward manner, the author successfully draws attention to the issue and to some of the arguments around it – a good awareness-raising tactic for those of us in the west.

Overall the book is one that cannot be put down. Colin Cotterill is so good at setting expectations and building suspense - then puncturing it with humour. The Axe Factor is a wonderful read.