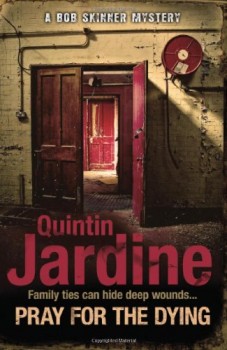 Quintin Jardine’s Bob Skinner series runs to 24 books written over a period that now tops two decades. ‘Big’ Bob Skinner first appeared on the Edinburgh police scene in 1993 as a Detective Chief Superintendent and has steadily worked his way up to the post of Chief Constable in his beloved city. But that’s as high as he seems to want to go. He thinks the Strathclyde area is simply too big and certainly isn’t looking for the top job there, especially now it’s occupied by Toni Field, a woman he very definitely doesn’t see eye to eye with.

Skinner’s also vehemently opposed to political plans for a unified forced across all of Scotland, and news that his wife, Labour party first minister, Aileen de Marcos, plans to join forces with the Tories and push the plans through is the final straw for a marriage that many thought wouldn’t last.

At the end of the preceding book, Funeral Note, a gunman succeeds in blowing someone’s brains out at a charity concern in Glasgow. As I commented at the time, I felt slightly short-changed by the ambiguous ending, but Pray For The Dying soon sweeps away that feel as Skinner charges in like a bull in a china shop and takes charge amidst a scene of complete chaos, with the victim’s body still leaking blood and brains onto the floor.

I soon realised that the victim wasn’t who I’d expected, and with Strathclyde’s ambitious Chief Constable lying dead at his feet, Skinner doesn’t have much choice about accepting the job of acting Chief Constable in a force that he’s on record as criticising as being too big and unwieldy. The best he can do by way of negotiation is to limit the secondment to three months and make it clear this is purely a temporary appointment.

Skinner’s love-life is as splendidly tangled as ever as he extricates himself from the ambitious Aileen de Marcos and falls back into bed with former wife Sarah, now back in Edinburgh working as a pathologist. He’s as down to earth as ever, but woe betide anyone who crosses him, as the big man has the subtlety of a brick in a sock and at one point is even seen to deploy his famous left hook.

There’s less of a ‘rabbit’s friends and relations’ feel about Pray For The Dying, as much of the cast of thousands in Edinburgh, such as Andy Martin, Mario Maguire and Maggie Steele are off page for most of the book, but there are plenty of background characters anyone familiar with Skinner’s past will appreciate, such as MI5 agent Clyde Houseman, once a gang-banging teenager from a sink estate, his boss Deputy Director Amanda Dennis. Neil McIlhenney, now working for the Met, makes a welcome appearance and there are plenty of new folks to meet, including the tall, tactless, acerbic DI Lottie Mann, who doesn’t take any crap off anyone at a crime scene, including the man who will soon be her boss, and Dan Provan, a man who’s gone as high as he wants to in the job and now just wants to get on with being a copper and watching his DI’s back.

Yes, the books have their flaws. The point of view has an unfortunate habit of bouncing around without warning, Jardine’s latest attempts to render local speech gets grating after a while (constantly using ‘Ah’ instead of ‘I’) and there’s an awful lot of exposition in dialogue, with characters explaining things and acronyms to each other that they would actually have known. But overall, I don’t care. I’m sufficiently wrapped up in Bob Skinner’s life and career and that of his friends and colleagues that I pounce on every book in the series with great glee and then devour them in a couple of sittings, and this one was no exception. Skinner is on top form here and long may it last.