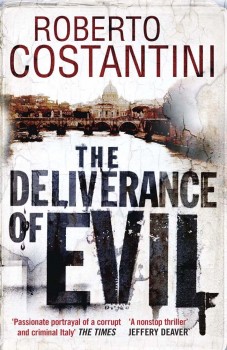 The Deliverance of Evil

Balistreri gives something of his background - a privileged but troubled childhood in Libya, followed by a violent adolescence in pursuit of neo-fascist concepts of honour and military glory. At university in Rome he had joined the far right organisation, Ordine Nuovo, and spent three years clashing with the Communists before it was banned.

The disorder that followed seemed to him a betrayal of the ideals for which he had been fighting and he decided to join the Secret Service, persuading himself that he was working on behalf of ordinary innocent people. When his cover was blown and he was in danger he approached his brother, Alberto, who called in a favour from the Minister of the Interior and eventually managed to get him a position in the police, with the rank of commissario.

It is this background which has produced the young man encountered at the beginning of the novel. He is stationed in a quiet, middle-class area of Rome that makes few demands on him, well away from the chaos and decadence of the historic centre. He likes to eat well and play poker but his main pastime is women - women of any kind, any age, any race, providing they are good-looking and available for one night.

The opinions of others - not even those of God - are of no interest to him as he pursues his own version of La Dolce Vita. He is arrogant and believes in nothing. He is anti-clerical, anti-government – which he regards as full of criminals and cheats – even anti-Italy. Even when a beautiful young girl, Elisa Sordi, disappears he cannot stir himself to do much about it and prefers to watch the 1982 World Cup final. When the body of the young girl is discovered in the Tiber and he feels that he might have prevented the murder he begins to realise the depths to which he has sunk. His guilt is so great that he just wants ‘to fall asleep for ever.’

The second part of the book goes forward 24 years and Balistreri is acting as head of the Special Section in Rome. If Floris, the Chief of Police, had had his way Balistreri would have been head of the Special Foreign Section which supports the Rome Flying Squad. That job, however, which he fully deserved, had been given as a political favour to a career policemen, Antonio Pasquali. Balistreri has changed, partly as a result of the self-disgust he felt following the death of Elisa Sordi, and partly because he has simply grown older. The wildness of his past is behind him and he now applies himself to the task of serving the public. When another young girl is murdered – again in a World Cup year – he marshals all the resources at his disposal to find the killer. But then other, apparently related, murders begin to occur and it begins to look like the work of a serial killer.

Whilst the plotting in the first part of the book is quite neat, that in the much longer second part is more complex and intricate – requiring occasional backtracking – and very clever. There are constant surprises for the reader but each is always entirely convincing. The suspense is maintained right up to the very end when we are made aware of what happened 24 years ago to the beautiful Elisa.

The characterisation is very carefully done. Leaving aside Balistreri himself, there is the supercilious Count Tommaso dei Banchi di Anglieno, with his contempt for everything and everyone; his son, Manfredi, born with a disfiguring hare lip and self-conscious to the point of obsession; Piccolo, the fiery woman police officer quite capable of beating up a man, and Pasquali, more concerned with politics than with his duty to the public – all living people in whom we can believe. Whilst these are the main persons, there are many more who appear only briefly but who never fail to hold our attention.

Crime writers who wants to add verisimilitude to their stories by placing them in a firm social context are becoming ever more common, but Constantini achieves more than this by making that social context an integral part of the story. We are always aware that we are in Rome, with its noise, its traffic, the squalor of the poorer parts in which rubbish collection has been handed over to a private company which concentrates on keeping the tourist centres clear, to the detriment of the poorer suburbs. Illegal extensions to houses are common and every bar in the city has an ‘out of order sign on the toilet door.

The worst slums of all are reserved for the camp of Romanians and Roma, where the air is foul with the smell of excrement. But not only do they have to live in appalling conditions, they also have to cope with the suspicions and accusations of the native population. Constantini expertly uses this everyday situation to introduce the Roma into his narrative. Also part of it is the corruption, bribery and the carefully-controlled contracts endemic in Italian government, as well as the tax evasion practised by the middle classes.

While it is undoubtedly a long book, The Deliverance of Evil never seems so, and it is hard to put the book down until the final answers are obtained. The second part of the trilogy has now been published and those who read the first part will no doubt be scrambling to get hold of it. If the standard is anything like that of the first part it will certainly be worth doing so.