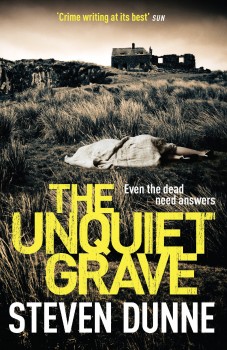 Steven Dunne’s maverick DI Damen Brook is back with the fourth in The Reaper series – and it seems he hasn’t learnt from past mistakes. Despite escaping with a suspension for a sackable breach of procedure, Brook continues to ignore the basic rules, preferring arrogantly to back his own ability. In similar vein, Dunne has done nothing to correct some flaws in his depiction of police work and structure.

For anyone writing police procedurals, no matter how clever, it pays to get the basics right – particularly when dealing with a ‘real’ setting. Derbyshire Constabulary has no cold case squad. If it did, such a unit would be based at the force headquarters, not split between divisions and under local control. This may sound pedantic, but many readers of the genre have more than a smattering of knowledge of police organisation and find such errors detract from their enjoyment.

Despite this complaint, Dunne has produced yet another twisted, chilling, but quite compelling slice of the darker side of humanity as Brook pursues the answers to a 50-year-old mystery. As always the characterisation is superb, his portrayal of an ageing medium so gothic it belongs in a horror film, and the dialogue crisp and believable.

Back at work, Brook, never a popular figure following his enforced arrival from the Met, finds he still has many enemies, including a divisional commander who is waiting for a chance to force him out, and a fixated and vindictive local reporter who will do anything he can to accelerate that day.

Brook is relegated to the cold case unit and, surrounded by ancient paper files full of details of other detectives’ failures, he consider his own bleak future. His relationship with his daughter is badly strained, he’s stopped smoking and is subsisting on a bachelor diet which revolves around pasta, rice and cream cheese – hardly a great lifestyle. Only his former partner, Sergeant John Noble, still believes in his integrity and ability. His sole departmental colleague is a former CID man, so obsessed he has devoted life and career to trying to catch the killer of his sister.

Examining what appears to be a series of murders of teenage boys dating back to 1963, Brook begins to see a pattern. The deeper he digs, the more he finds – including a possible link to the murder which so dominates the life of his colleague. But as his enquiries progress he begins to suspect that misplaced loyalty – or even worse – has produced a web of lies and deceit among both current and former members of the divisional CID.

Again the plot is almost unbelievably complicated and chilling, offering a series of shocking mini-climaxes before its violent and unexpected conclusion. Like Deity last year it kept me guessing right to the finish and I recommend it to anyone who appreciates a real brain-teaser.