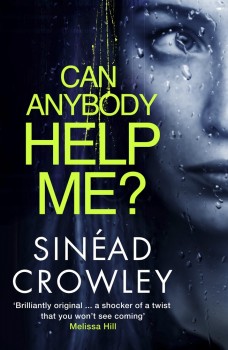 Can Anybody Help Me?

Yvonne is struggling after the birth of her first child. She’s moved to Dublin because of her husband’s job and hasn’t yet built up a support network, so instead, she turns to an internet site for help. But not everyone on there is all they seem.

Hands up who spends too much time on internet forums? OK, then this is a book for you. It’ll creep you out, make you question the identity of your online friends and will very probably put you off having a baby as well.

Whether those consequences are good or bad will be up to you to decide once you’ve finished reading the clever, gripping debut from RTE’s arts and media correspondent, Sinéad Crowley. Personally, I was never at all struck on having a baby, so I’m all right on that score, but I do spend a lot of time online, so that side of things certainly resonates with me. It’s a salutary lesson on how much information we can give away at times without even thinking about it to people we’ve never met.

Yvonne Mulhern has recently moved to Dublin from London and is the mother of a new baby. She’s thoroughly frazzled, tired all the times and struggling to cope. Her husband, Gerry, the producer of Teevan Tonight, the new current affairs programme that’s taking Ireland by storm, is hardly ever at home, and when he is, Yvonne doesn’t think it’s fair for him to lose sleep because of the baby, and he spends most nights in the spare room.

She’s not close to her mother-in-law and doesn’t want to turn to her for help. Instead, she finds herself increasingly drawn to the internet community, netmammy, a forum for mothers; people just like her that she can swap problems with, take comfort from, and generally hang out with online at any hour of the day or night.

When one of her online friends disappears and a body of a woman whose profile sounds frighteningly close to that of the woman who posted as MyBabba is found, Yvonne is worried and contacts the police. But before Detective Sergeant Claire Boyle, herself just about to go on maternity leave, can follow up on the call, MyBabba appears online again, and Yvonne quickly retracts her somewhat incoherent phonecall. In consequence, Claire is left with few leads in the murder enquiry and starts to push herself too hard.

Sinéad Crowley’s story of two very different women is a frightening look at how the internet can be both a blessing and a curse. The online interactions have the ring of authenticity to them that no doubt comes with having spent time on such forums. Claire Boyle is a strong character, not wanting her pregnancy to compromise her ability to do her job, and it’s hard not to empathise with Yvonne Mulhern.

Can Anybody Help Me? is a thoroughly gripping, well-paced psychological thriller and for many people will no doubt be scarily close to home. And if you can work out all the acronyms without benefit of the explanations, you almost definitely spend too long on this sort of forum!