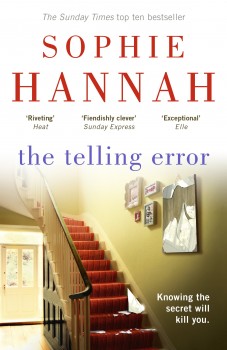 A personal ad appears on a website, describing a murder in detail. Meanwhile Nicki, a suburban mum, panics on seeing a familiar policeman when she is on her way to pick up her child from school. She seems to have a guilty secret. Is she involved in the murder?

Keeping secrets seems to be the norm for Nicki. There is no one to confide in. Her husband is too nice, her sister-in-law too unpleasant. So a website offering the opportunity for some confidential chat seems to be a good idea. But who is she chatting to?

She has been intrigued by the famous newspaper columnist who lives locally and has been involved in Twitter conversations about some of his controversial views. However, when he is found murdered she realises that her correspondent is not him but someone else. Unfortunately she panics when she finds herself driving past his house and due to her subsequent erratic behaviour the police think she may be the murderer.

This is a complex and original plot which revolves around bored mum of two, Nicki , and her extended family. Much of the narrative relates to what motivates the characters and relates to things that people might sometimes do but would rarely own up to. Delving into people’s minds and their tortuous thinking can sometimes become tedious, although there is a sense of curiosity to find out the cause of their seemingly irrational behaviour.

Some of their thinking comes through the use of social media such as Twitter, Facebook and internet dating sites. However, the story is unlikely to make any converts to the use of such sites. Cyber-bullying keeps the story mired in the murkier areas of life but is probably an accurate reflection of what much of this technology is used for and at least is recognition of how life has changed for some people.

When Nicki meets her correspondent incognito she just sees everything that happens as part of the mystery – Nicki’s abusive background as a child has probably contributed to her warped sense of the normal. The book has a number of strong women as characters. In addition to Nicki, whom some would see as strong in the way that she has done something different, there is Paula, the local MP who also had Twitter conversations with the murder victim. But whereas the character of Nicki is explored through her own reflections and thoughts, Paula comes to life through the reactions of Simon, the main detective on the case. Similarly there are at least two women who are portrayed as weak. Charlie, Simon’s partner, seems to occupy the middle ground between strong and weak, and in that sense this is a novel about women, in which the men are just bit players, although perhaps the most influential. In this clever way the novel explores modern relationships in the age of supposed equality.

The team of detectives is the same as in the author’s previous novels although the team is kept very much in the background. It may be that only readers of the previous books will understand some of the tensions within the team. The book is very well written with the characters given depth, and with an intriguing plot. The issues embedded in the book are interesting, although the use of social media may well reinforce readers’ previous views of this medium.