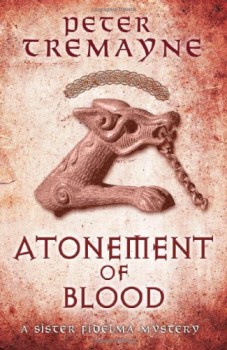 An assassination attempt is made on Colgu, King of Cashel. Fidelma, his sister, decides to try to find out who did it. A long journey ensues in which she makes good use of her skills as a lawyer.

A banquet in memory of a great poet and churchman is to be held by Colgu, the King of Muman, at his stronghold in Cashel. It is attended by the lords of some of the local territories, all familiar faces, and therefore it is the king’s wish to keep things informal. Just as the food is served a man in religious robes enters the hall with a message for the king. In the ensuing drama the Kkng is badly wounded and its not known whether he will live or die.

The religious man had been shouting the name of a woman and the king’s sister, Fidelma, decides to find out who this woman is or was. She sets off on a journey through the neighbouring territories, accompanied by her husband Eadulf, and Gorman, a warrior. As a lawyer, or dahlaigh, she has the authority to question anyone in the kingdom, and so is well-placed for the task.

The story is set in medieval Ireland in the seventh century AD, and certainly succeeds in bringing the era to life. The descriptions of clothing, artefacts and buildings are meticulously done and give a very interesting insight into Ireland at this time. Particularly intriguing are all the references to the way in which the law was written and practiced at the time. Using the language of the times for all the technical terms and for the names of the characters also brings realism to the story, although makes it difficult to read and follow at times. It is tricky to memorise names that are so unfamiliar, although there is a helpful list at the start of the book. There is also a map but it is hard to see why many of the places discussed were not shown on this. Possibly this is where fact and fiction meet.

It is not easy to try to merge a work of non-fiction with that of a crime fiction novel, and one wonders whether, despite the ancient context, the characters might have been imbued with modern traits and thought processes. It is a hard conflict that is difficult to resolve, but nevertheless this is an enjoyable novel with an intricate plot, all of which gets explained in the final pages.

Along the way there is much thought and problem solving, and Fidelma is ably helped by the insightful views of her husband, Eadulf. He comes originally from a different area and so is able to seek information and explanations about things that he sees as different from those with which he is familiar. This is a useful tool in making the history explicit. Atonement of Blood is well written using a precise style, but with believable dialogue.