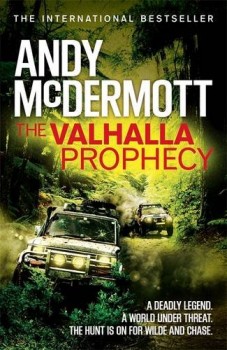 Archaeologist Nina Wilde and her ex-SAS husband Eddie Chase are in a race against time with the bad guys to find Valhalla, the legendary Hall of the Slain.

If you’ve read any of Andy McDermott’s previous books featuring unconventional archaeologist Nina Wilde and her ex-SAS husband Eddie Chase, you’ll now exactly what you’re in for, and if you’ve not met them before, trust me, you’ll soon get the hang of the formula. There’ll be a race against time to find a legendary place or a priceless artefact, be it Atlantis or Excalibur, involving a fast-pace romp with bad guys galore. If it ain’t broke, don’t fix it, so McDermott replicates his usual winning formula here to good effect.

In The Valhalla Prophecy, Nina and Eddie, who certainly can’t stay out of trouble for more than five minutes, get embroiled in the theft of a Viking runestone, stolen by a gang who are quite happy to bump off anyone who happens to get in their way. The stone – one of a pair – is said to hold the secret of how to find Valhalla, the Hall of the Slain in Norse mythology.

But on this occasion, finding Valhalla is only the start of their quest. From there they have to follow a series of clues to the location of a substance capable of being turned into the worst weapon of mass destruction the world has ever seen. This is a crash-bang-wallop thriller, OK? There’s no point in picking holes in the plot, just hang on and enjoy the ride.

As ever, there’s a series of breakneck chases and oodles of cinematic violence that positively leaps off the page. Yes, as I’ve just pointed out, it all involves a fair amount of suspension of disbelief, but if you like to check your critical faculties in at the door and just have a whole heap of fun, this is the book for you. And for fans of the gun-loving Eddie, you’ll get an extra dimension here, as a lot of the plot revolves around events that happened eight years earlier when Eddie, newly out of the army and heading for a messy divorce, takes on a hostage rescue job in Vietnam.

Unusually for a story told partly by reference to past events, the action isn’t impeded, but instead we get some interesting back story and added depth for Eddie, who’s very much a favourite of mine. For the first time, Eddie’s actions threaten to drive a wedge between him and Nina, and the book ends on a darker note than usual.

They’ll be back, there’s no doubt about that because, in the same vein as the short-lived but delightfully ridiculous TV archaeological romp, Bonekickers – otherwise known as Bonkers – there’s still plenty of priceless treasures they haven’t yet set on fire, and some ancient sites they’ve not yet managed to reduce to a pile of rubble.

Watching Wilde and Chase in action is always great fun, and The Valhalla Prophecy is no exception to this rule. Their names were no doubt chosen for a good reason!