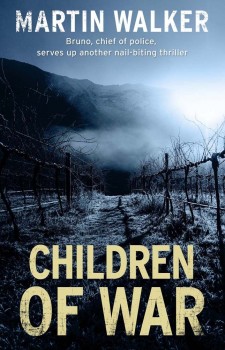 Inspector Bruno Courrèges is the chef de police in St Denis, a town in rural France that is now starting to rack up a body count that wouldn’t be out of place in Midsomer. In Children of War, Bruno has to juggle some competing priorities when he’s called on to investigate the brutal torture and killing of an undercover cop at the same time as dealing with the clandestine repatriation to his home town of Sami, a young Muslim man. Sami, who disappeared from a special school for autistic children near Toulouse, seems to have been half-starved and badly-beaten, and he wants to come home.

Whilst worrying that Sami, an ingenuous young man who was brilliant at fixing things, might have been radicalised during his time abroad, Bruno still wants to see him brought home to his family and they’re equally keen to have him back. The Mayor, battling departmental threats and idiocy with his usual sang-froid, concurs, so the wheels are put in motion for Sami’s return.

When evidence comes to light to link Sami with a ruthless bomb-maker called the Engineer, attempts are made to have Sami extradited to the US. Nancy Sutton from the American embassy arrives in St Denis. She’s sharp, known to be connected with the FBI and also knows Bruno’s former lover Isabelle and her employer, the Brigadier, who’s as ready as usual to drag Bruno into his machinations.

As ever, Martin Walker tells a good story set in a region that he clearly knows and loves. St Denis comes alive in his hands and its wartime past is never buried very deep, surfacing as it does here with the fascinating and poignant story of how numerous Jewish children were saved from the Holocaust. Walker’s sub-plots are always as interesting as his main narratives, and The Children of War is no exception.

The darkness of war, both past and present, runs as a theme throughout the book, and Sami’s story is horribly poignant, a young man ruthlessly exploited, who did what he had to do in order to survive. Even Walker’s usual mouth-watering description of his character’s various meals fails to bring much in the way of light relief.

Walker only falls down on his seemingly constant need to introduce yet another potential love-interest for Bruno, who – even for a Frenchman – has a personal life of increasingly labyrinthine complexity. The female characters don’t have the layered depth of their male counterparts, and mostly seem to be there as an adjunct to men, even feisty doctor Fabiola. But even with those flaws, this is still a series that commands respect, not least of which for its author’s never-failing ability to find new ways of wreaking havoc in the Perigord countryside.