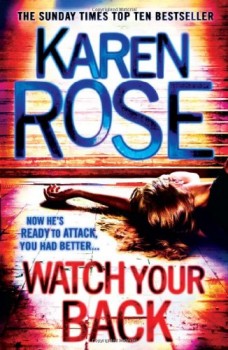 Detective Stevie Mazzetti is recovering slowly from having been shot whilst working on a previous case, but someone is still out to kill her. When her daughter is also made a target she agrees to be hidden until the shooting stops. But will it?

Detective Stevie Mazzetti was shot when she was working on a previous case. Her life was saved at the time by private investigator Clay Maynard, who she subsequently sent away although he wanted a relationship. Now, despite being off work due to her injuries, someone is shooting at her again and once again Clay seems to be in the right place at the right time to save her.

When her daughter Cordelia is targeted in order to lure Stevie out into the open, Stevie realises that it is time to cooperate with her friends and accept their offers of help. Will she finally accept Clay’s friendship, though, or even survive such an evidently determined campaign to end her life? She has no option but to work with her friends to try to discover who is behind all the violence.

This is an on-going story about a group of people, all based around various law enforcement teams, in Baltimore, USA. There have been a number of books before this one and so, although this story stands on its own, the past history of each character may well be familiar to many readers. Whilst previous books have been a mixture of crime and romantic fiction, the balance of this one has definitely shifted towards more of the romantic fiction. The development of the relationship between the two main characters is a strong theme in the story. The usual violence and fear are still present, however, and as always serve to heighten the emotional atmosphere attached to the relationships. The trademark of all these stories is the author’s ability to sustain such a high level of tension from start to finish.

The main characters are developed by making explicit their reactions to each other and to the violent events. There is a real effort made to help the reader understand what motivates the participants. The dialogue is very fluent and revealing of the speakers, with their thoughts being written partly in italics and partly as though observed by a third person.

Running through the book is a strong problem-solving element and the reader can engage with the logical thinking of the characters, both individually and in groups. Unusually this applies to all the individuals, both good and bad, so an understanding of the whole situation gradually builds. The main focus that drives the story then is to follow how the good characters work out what the bad ones are doing. And this formula certainly works in maintaining the involvement of the reader.