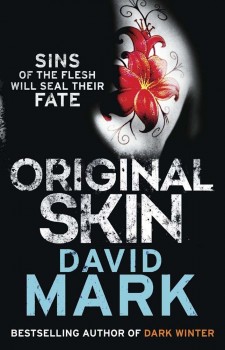 DS Aector McAvoy of the Humberside Serious and Organised Crime Unit finds a mobile phone which leads him to believe a young homosexual’s death, ruled a suicide, may be more. Already in the middle of a drugs war, he must now plunge into a world of sleazy and violent sex to uncover to uncover the truth.

The giant Highlander Aector McAvoy was a Richard and Judy Book Club choice on his debut in Dark Winter. In this follow-up, David Mark’s intensely moral and frequently naive Detective Sergeant with the Humberside Serious and Organised Crime Unit finds himself in waters as dark and murky as the river itself.

This is not a story for the faint hearted. Much of the narrative is violent and degrading, but it is superbly written, fast-paced and well researched with characters whose flaws make them believable, if often completely unlikeable.

When Aector finds a dumped mobile phone, its memory contents lead him to believe the death of a flamboyantly tattooed promiscuous young homosexual, ruled a suicide, may have been murder. For reasons of their own, the killer is also hunting a female friend of the dead man – also tattooed and also deeply involved in the ‘stranger sex’ underground.

Returning protagonists from the first book develop both their characters and relationships, with Aector, often appearing simple and embarrassed on the surface, emerging as a man of intellect and instinct coupled with a deep and simplistic love for his young wife and family.

PC this book isn’t. Most of the characters are realistically foul-mouthed. Women are defined solely by their sexuality. The violence is graphic to the point of obscenity. The travelling community receives no favours – presented in the ‘gypsies, tramps and thieves’ image of popular imagination. And the once great port city of Hull hardly comes across as a place where you would want to spend much time, where deprivation, violence and depravity appears the major currency. But for all that, this is a compelling read.

Mark is a former Yorkshire Post crime writer – and ex-crime reporters invariably recycle what they know. In my own career I’ve met all his police characters bar Aector himself – a veritable beacon of honour, decency and correctness, a true 21st century George Dixon. The incompetent, oleaginous, assistant chief constable whose appointment is a mystery; the senior officer skirting the edge of criminality; the embittered, bullying, detective who has sacrificed home and marriage to his obsession with ‘The Job’; lower ranks, hardened by thankless and dangerous service, often violent and lacking in morals – they are all there. In keeping with the times, many senior ranks are now female, bringing their own twist to these enduring traits, but overall this is the most accurate depiction of a real police force I’ve read.

It’s hard not to have a strong opinion about this clever, sometimes grim, book. You’ll either love it or hate it. I’m a Marmite man – and would recommend it to anyone with a strong enough stomach.