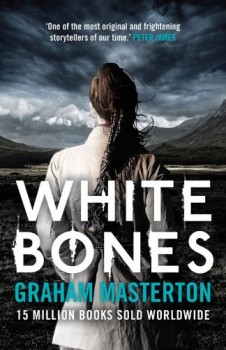 I’ve often complained about American authors trying to outdo each other for sheer bloody horror – any nasty thing you can write, I can imagine something nastier. But if there were a prize for the horror of horrors, Graham Masterton would lift it light years ahead of the competition. This is one of the most disgusting books I’ve ever read – but so well done, so original and even in parts so frightening, I couldn’t actually put it down!

His style is fast and pacey, his characters strong and easily identifiable, his dialogue believable and his plot simple enough for anyone with any knowledge of Irish mythology.

But now the health warning – if you are at all squeamish or nervous, don’t even open this book! Amid the various twists and turns, interesting side plots involving his heroine’s marital problems, the Cork underworld, the legacy of the IRA and the place of the traveller families in modern Ireland, there is blood, guts and torture enough to sicken any but the strongest stomach.

And it’s all interwoven with enough elements of western Irish and Germanic mythology to produce a clever procedural which more than effectively doubles as a horror story.

This is the first in a new series featuring Superintendent Katie Maguire, Ireland’s first senior woman detective. If the follow-ups are half as good, Masterton’s onto a winner.

The dismembered bones of 11 women, whose skeletons all bear the marks of a butcher, are found on a Cork farm. All died around 1915 – and were probably skinned alive. A young American hitch-hiker goes missing, and her bones, similarly stripped and arranged in a mystical pattern, are found on the same farm. Maguire must solve the ancient murders to find a link to a terrifying modern killer – and in doing so, puts her own life at risk.

While one or two of the solutions are, to say the least, a little convenient, the story switches between the credible and familiar to scenes reminiscent of Edgar Allen Poe at his most horrific without the slightest change in pace.

Criticism? The final twist in this awful story might just be one too many, but it is so in keeping with what has gone before that by then, I was fascinated beyond shock or surprise.

Masterton, who spent five years living in Cork, provides a handy and necessary dictionary to cover his use of dialect and slang – the language in that part of Ireland is often entirely different.

Taken all round this is a magnificent piece of writing, but before you pick it up, do remember the health warning!