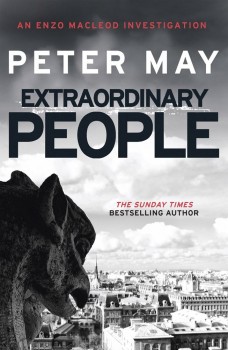 Peter May’s series featuring former forensics expert Enzo Macleod, a Scotsman living in France, started with Extraordinary People, first published in the USA in 2006 and now brought to a UK audience by Quercus. I enjoyed May’s series set on the Isle of Lewis, and this one perked my interest, being set in France and mentioning the Paris catacombs. Discovering that Enzo lives in Cahors, a town I know well, was a bonus.

Ten years ago, Jacques Gaillard disappeared without trace. Journalist Roger Raffin is convinced that he’s been murdered, but there’s never been any evidence of that, despite several investigations. Enzo Macleod is determined to see if he can succeed where others have failed and, as a result of a possibly rather ill-advised bet, he has 2,000 Euros he can’t afford to lose riding on the outcome.

With buried body parts, cryptic clues and a chase around the French countryside, the book is a slightly odd mix of police procedural and Dan Brown-style conspiracy thriller. But it’s actually a lot more engaging than that probably makes it sound, mainly due to the characters of Enzo himself and his friends and family, particularly his daughter Sophie and her boyfriend, Bertrand. The plot itself veers uncomfortably close to being overly contrived at times, a standard hallmark of anything that seems to involve solving clues and following a trail, but thankfully, Extraordinary People never entirely jumps the shark.

Despite Enzo’s forensic background, most of the detective work appears to be done by means of Google, rather than any scientific means, notwithstanding his successful attempt to quite literally get blood out of a stone. The plot is undeniably cleverly-constructed, and although I didn’t make any serious attempt to follow the clues or check any of the workings out, it had a reasonable ring of authenticity. Certainly, the bits I was familiar with, mainly the descriptions of the labyrinth of mined tunnels deep beneath the streets of Paris, did look well researched, particularly in the description of the various illicit uses to which they get put.

If you can suspend disbelief for the artificiality of the construct, then there’s a lot to like about the book. My favourite character by far is Bertrand, written off by Enzo as a suitable suitor for his beloved daughter, because he’s got facial piercings, works in a gym and leaves his metal detector lying around Enzo’s flat, just waiting to be tripped over.

With Sophie, Bertrand and his bouncy, ingenuous assistant Nicole in tow, Enzo travels what seems like almost the length and breath of France following and solving a clever collection of clues. The climax, played out deep beneath Paris, provides a very fitting finale. Enzo Macleod is very definitely no Robert Langdon and Extraordinary People is no worse for that!