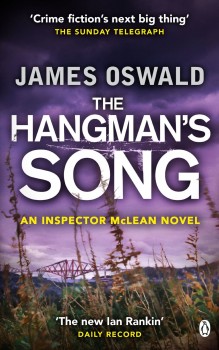 Once is happenstance. Twice is coincidence. Three times is enemy action. And that’s exactly what Edinburgh cop, DI Tony McLean thinks when the city is hit by a series of suicides by hanging. On the face of it, none of the dead men have any connection with each other, but despite that there are startling similarities between the individual cases.

The knots used to tie the rope are all seemingly identical, all the people appear to have removed their clothes before killing themselves and, even more strangely, none of them have any forensic traces on their hands or under their fingernails from having been in contact with the rope. In fact they don’t seem to have handled the rope themselves, and the thick, hemp rope all seems to have come from the same length.

So when Acting Superintendent Duguid makes it perfectly clear that he wants all the cases written up as suicide and filed away neatly, he’s not best pleased when his subordinates appear to have other ideas. DI McLean is certain there’s more to the deaths than meets the eye, but he’s on partial secondment to the Sexual Crimes Unit and suffering from being the servant of the two proverbial masters, pulled away from the suicides into investigating the death of a pimp and the savage beating inflicted on one of his prostitutes. On top of all that, McLean’s conscience is pricking him to spend more time on personal matters, as his former girlfriend, Emma, is showing signs of waking from a coma.

The Hangman’s Song is one of a growing number of police procedurals taking tentative steps into a more shadowy world, and in this case I don’t mean the criminal underworld. Unlike Stephen Leather’s Jack Nightingale series, James Oswald’s books wear the supernatural elements more lightly, and are all the better for it. There’s little overt woo woo, but plenty of sinister elements that dish up some very well-pitched shivers.

I might be slightly biased, as I like urban fantasy in most forms, but rest assured that if you are a fan of more traditional procedurals, you’ll still find plenty here to like. There’s an entertaining mix of grumpy cops, lazy cops and corrupt cops and others, like McLean, who are just trying to do their jobs against a backdrop of the inevitable fall-out from the amalgamation of Scotland’s regional police forces into the new all-singing, all-dancing Police Scotland.

DI Tony McLean is a strong main character in a story that is very definitely gathering depth as it picks up and deals with elements from earlier books, whilst leaving other threads to be drawn on in future. This is definitely a series to keep on your radar.