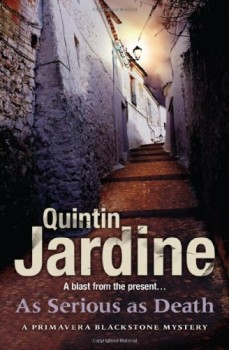 As Serious As Death

Primavera Blackstone is employed to investigate attacks on aircraft owned by abrasive millionaire Jack Weighley. Are they vandalism or terrorism? When people close to the investigation begin to die, Primavera has to find the solution quickly before her own family becomes a target.

Primavera Blackstone is living quietly as a single mother with three children in a small Catalan resort in Northern Spain. When ex-policeman, now security consultant, Ricky Ross, a figure from her murky past, turns up in her village, she is keen to know the reason why. He explains that he is working for Jack Weighley, owner of WeighleyAir, a successful budget airline, and has been sent to investigate vandalism of aircraft and to improve security at the local airport.

As Ross goes to leave, his car explodes into flames and he narrowly escapes with his life. It is obvious to Ross and Primavera that the fire was caused by a car bomb, but the Spanish equivalent of Special Branch steps in and declares the fire to be accidental.

Jack Weighley arrives in Spain the next day and persuades Primavera to work for him as a troubleshooting consultant, so she and Ross get to work investigating the vandalism and the car bomb. Is it, as the police insist, a case of Catalan separatist terrorism or is it more personal? As the people involved in the investigation begin to turn up dead, Primavera recognises that she must solve the case before her own family becomes a target.

This was my first Quintin Jardine novel, although it is the latest in a long series. The central character seems to have had an unbelievably varied and exciting career (as is not unusual in long-running series), and I felt that I would have understood her better had I first read the earlier books. Having said that, the story does stand alone and its logic hangs together well.

The setting, in the part of Northern Spain known as Catalunya, is beautifully described and the use of Catalan expressions adds to the atmosphere, as well as providing the possibility of terrorism as a motivation for the criminals. Primavera’s home life sounds idyllic until it is invaded by the real world in the form of Ricky Ross and Jack Weighley.

The story starts relatively slowly, but once it gets going it moves at a good pace, with enough plot twists to keep any mystery fan happy, and a steadily rising body count. The ending is unexpected, if a little unsatisfactory to anyone wanting the real criminals brought to justice, although Primavera is not one to let things slide by her. All in all, As Serious as Death is a very good read.