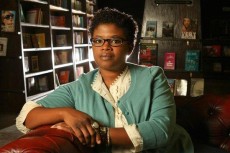 Attica Locke was born in Texas and satisfactorily educated there. She is one of seven siblings, made possible through many divorces and different family configurations. She is quite short and sensitive about it. Her 12-year-old daughter has already passed her in height. Attica spends her days struggling with how to project parental authority on a being who is looking down on you.

She drinks too much red wine, but has come to accept this about herself.

A former fellow at the Sundance Institute’s Feature Filmmaker’s Lab, Attica works as a screenwriter as well.  Most recently, she was a writer and producer on Netflix’s When They See Us and the Hulu adaptation of Little Fires Everywhere. She loves reading, the Bachelor franchise, and some prestige television.

Attica is a native of Houston, Texas, and now lives in Los Angeles, California, with her husband and daughter.

Why have I just now discovered the magic of napping?

My husband
A painting of Darren Mathews that accompanied the review of Bluebird, Bluebird in the Financial Times
A treadmill
A chess set
A guitar
An obnoxiously large television
A large window with a view to the ancient ash tree in backyard (the reason we bought this house and the view I have from every south-facing window in my house)
My wedding photo album
A bitten pencil

The man you’ll marry is so much better than the idiots you’re sleeping with.