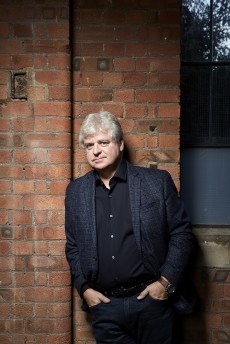 Linwood Barclay was born in the US, but his family moved to Canada just as he was turning four and ran a caravan park called Green Acres in Ontario. This is where Linwood grew up, and after his father’s death Linwood ran the family business until a Canadian daily newspaper offered him a reporting job.

After that, Linwood worked in journalism for 30 years as a reporter, columnist and editor, including a stint on the night shift piecing together the layout for the day’s newspapers.

Linwood now lives in Toronto with his with, Neetha, and they have two grown children. He’s also a self-confessed model railway nerd.

- Woman on sidewalk, waiting with bag in hand, for dog to make a deposit on our front lawn.
- Models of, among other childhood things, Gerry Anderson’s Supercar and Fireball XL5, and the Seaview submarine from Voyage to the Bottom of the Sea, on my shelves.
- Fire hydrant directly in front of our house, which means no one should be parked there, but a red Kia’s been there two hours and still hasn’t got a ticket, which is amazing in this neighbourhood, where the parking enforcement officers are ninjas, popping out of nowhere.
- Real estate agent putting a SOLD sticker on For Sale sign next door.
- My framed Harry Benson photo of Alfred Hitchcock on the wall next to my desk.
- Framed animation still of the Dark Knight from Batman: The Animated Series.
- Guy across street horking from his second-floor balcony.
- My most treasured book, a personally inscribed hardcover of Sleeping Beauty by Ross Macdonald.
- A 1960s photo of my dad, Everett Barclay, in the photo studio of the Toronto ad agency where he once worked.

Scrambled eggs with cheddar cheese and, if we have any, some diced ham to mix in with it.

- Barack and Michelle Obama
- Judi Dench
- David McCallum
- My dad, if he were still with us
- Mel Brooks
- My wife, Neetha

Coffee, books, series to binge-watch, model trains, the 911, Neetha (not necessarily in this order).

They’re all in one sentence: “Stop writing, it’s vodka o’clock.”

Paris, Cape Cod, Newfoundland’s Fogo Island, and if I happen to be in any of these places, home.

Donald Trump
The celebration of ignorance (see line above)