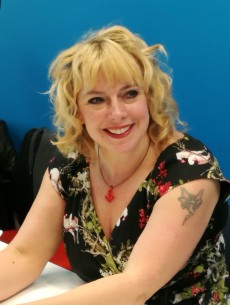 Syd Moore grew up in and lives in Essex where her Essex Witch Museum mysteries are set. She has had a lifelong fascination with witchcraft and each of the books in her series draws on real-life mysteries and historical events.

For nine years prior to crime writing she was a lecturer, worked in the publishing industry and presented Channel 4’s book programme, Pulp. Syd was founding editor of Level 4, a magazine for arts and culture, and co-creator of Superstrumps, the game that reclaims female stereotypes.

In 2017 she founded the Essex Girls Liberation Front, which aims to change the definition of an Essex Girl and the stereotype of women of Essex, and has spoken on radio, television, political panels and at festivals and universities about the stereotype and problems that face women today. She is also a UK ambassador for DINNødhjælp, the Danish charity that helps Nigerian ‘witch’ children.

1. Lots and lots of overgrown ivy
2. My new hammock in its frame
3. Two Victorian chimneys
4. Next door’s cat, Delilah, playing with a heart-shaped leaf
5. One plastic skull on a pile of Strange Tombs
6. The underbellies of dove-grey clouds
7. A glass of chilled pinot
8. 35 World War II Dakota planes commemorating the D-Day landings
9. One concerned seagull

The wind shelter opposite the Halfway House in Thorpe Bay, Southend
The island of Formentera
Venice
The 1920s

‘Don’t panic. Everything will be all right’.