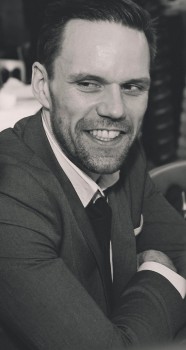 Will Carver spent his early years moving around Germany, changing home every 18 months as army kids so often do. One lunchtime, when he was 11, he was picked up from school and moved back to England.

In his teenage years, everything was about sport. He became a national-level sprinter and decathlete, but his heart belonged to rugby. At age 14, while playing, Carver broke his right leg and ankle in six places and was told he might never play again. Six weeks later he was back on the field – with one extremely skinny leg – battling for a place in the county team. He got in. Later that month he was scouted to play for Bath, the best team in the country and the team he had always supported.

Will turned down opportunities to play rugby professionally and opted not to accept an unconditional offer to art college to pursue his dream of being the first person in his family to go to university. He wanted to write plays and direct them. At university, he set up a successful (and profitable) theatre company but his degree managed to suck out all the love for theatre he had arrived with on that first day.

After university, there were a string of jobs in IT sales. Every day a small part of him died. He would write or read in his car during lunch hours, much to the chagrin of his colleagues. When Will’s team were told they would be losing their jobs, it was one of the happiest days he can remember. In that final month, when he was supposed to be working from home, he would log in on the work laptop to show that he was there but was writing a book on his personal laptop every day instead.

That book was called Girl 4 and would go on the become his first published work. Two more books followed, a novella and some short stories. Then Will disappeared for a few years, returning to his sporty ways, setting up his own fitness and nutrition company, before coming back the writing world with his new book, Good Samaritans.

Now, he divides his time between the fitness and the writing, working his body and his mind in those hours between the school runs and ferrying his kids around to various clubs in the area, thankful that, unlike his mother, he doesn’t yet have to drive all the way to Bath twice a week for rugby training.

All progress is made by the unreasonable man, mother fuckers.

I’m in my lounge, sitting with my laptop. I can see:
1. Half a bottle of Yamazaki whisky. (Maybe quarter of a bottle by the time I’ve finished this).
2. 11 different versions of The Great Gatsby.
3. A record player. (Plus vinyl).
4. My banjo.
5. Piles of books I need to find a home for.
6. A framed one-sheet poster of Cinema Paradiso.
7. The kids’ desk covered in paper, pens and double-sided sticky tape.
8. Six different candles. Yes, I need them all.
9. A metal sign that says, ‘This is your life and it’s ending one minute at a time.’
I know, how cool and bleak is my living room?

Pasta! I can cook that in eight minutes and come up with a sauce. Probably mushrooms with a (vegan) creamy sauce and spinach and some toasted pine nuts. Done! (If I could chop the butternut squash small enough, it might cook in time, too. Yum).

That feels like a large group to go drinking with, I prefer to keep it a little smaller. Anyway, here goes:
1. Hank Moody
2. Hemingway
3. Bukowski. Because I know they could keep up. And I’d expect myself and Hank to break off at some point and get into trouble. I wouldn’t have any more writers than that otherwise we’d all sit around bitching about publishing all night. *wink* But if you’re going to have writers, may as well have the best.
4. Joni Mitchell. She’s the greatest. She’d have stories. And she could play and sing as much as she wants to.
5. Joan Rivers. She’s hilarious and outspoken and could handle any of these guys around the table, swinging their literary dicks at each other.
6. Shaun T. Because he just makes me feel good. And he changed my life. And I’d love to share some wine and a box of donuts with him. They say you should never meet your heroes, but I feel secure that he would not disappoint. Also, I wonder what he’s like after he’s had a few …
7. Ted Bundy. Purely through psychological intrigue. Maybe he’s funny.

I’m assuming that we’re taking air, water and food as a given. But, while we are talking about food, let’s go with:
1. Hummus. I eat a tub each day. Nobody loves it more than I do. Nobody. I’d give up coffee and booze before I gave up hummus.
2. My kids. Of course. The best thing I’ve ever done. But, note that I put them at number two. That’s how much I love hummus.
3. Love. Not just crushed chickpeas mixed with tahini, garlic and lemon juice. The love of a partner, family, friends. And not your Facebook friends or Twitter followers or whatever. I mean love on that deeper level. And being able to love somebody back. I mean, what are we here for, right?
4. Sex. This is different for everybody. What’s normal for someone is not for another. Some people schedule it and some are at it all the time. But it should be about closeness and connection and fun and pleasure.
5. Exercise. I need this. A few days off and I’m edgy. I’m not talking about doing a few bicep curls at the gym and taking a picture for Instagram, I am talking about pushing myself to my physical limit so that I am dripping with sweat and breathing through my arse. It also energises me for my kids, my writing and allows me to eat so much hummus without putting on weight.
6. Art. I know it sounds corny. But I am a writer and I feel compelled to write every day. But I am inspired by listening to music and playing music, by paintings and poetry and all films made in Hollywood between Easy Rider and Raging Bull. And anything French. And sometimes I’ll even read a book.

Fuck. I love that it can mean annoyance or gratification or disbelief or agreement or a host of other emotions. I love writing it and saying it and seeing my kids’ faces when they hear it.
I love you. It just cures all, doesn’t it? Said meaningfully, it’s pretty much the greatest thing anyone can say to you other than ‘I love your writing.’
Dad. Nothing compares to that first time you hear it, but I still get those pangs every now and then. And it’s so gorgeous that only two people can say it to me.
So, I guess my favourite sentence would be, ‘Fuck, I love you, Dad.’

Manhattan. My favourite place on earth. There’s a feeling I get when I see that skyline from the cab as I approach. It’s a cool, creative, sexy place. It is films and books and music and food. I feel great there. It’s overwhelming. I’d go now if I had the money or a passport that was in date.
Superman’s Fortress of Solitude. I love the idea of being somewhere completely alone. No people. No phone. No internet. No temptation. No politics or religion or opinions I don’t care about. I think the world would be a better, quieter place if everyone could go to a fortress of solitude in their mind for half an hour each day.
Paris (in the 1920s). All the greatest writers. All the jazz. All the drinking. Yes. Yes. And thrice yes. I’m there. I’m running.
The cinema. I still find the act of going to the cinema to be a magical experience. It’s dark and people don’t talk and you can have a beer with your popcorn now. I like to sit near the front so the image hits my eyes before the people behind me. I worked at one for years. Apart from writing, it’s still the best job I’ve ever had. It’s the perfect escape.

Eating Animals by Jonathan Safran Foer. Anyone who eats food should read this.
Unshakeable by Tony Robbins. He’s just a very inspiring guy.
Adjustment Day by Chuck Palahniuk. The best there is. I’ve read everything he’s written.

1. When people say, ‘I don’t have enough time to…’ You fill in the blank. Cook. Work out. Write. Play. Read. I think that the things we want to do most are the things we actually do. Make the time.
2. So many driving-related things. But it’s the rudeness when somebody can’t raise a hand to say thank you for letting them out ahead of you. How hard is it to lift a hand from the steering wheel for a microsecond? Boils my blood. (Could have been people who smoke while they drive or BMW drivers who don’t indicate or when three men sit in the front of a van with their tops off).

Go vegan NOW, you idiot.
(On a side note, I mentioned this to my mum and she said she’d tell her teenage self to ‘always moisturise your neck.’ Way better than my answer).