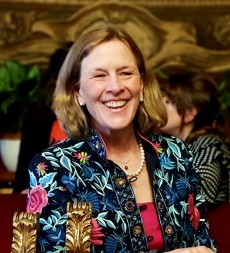 Kerry Hood was born and brought up in India – her father was in shipping. She was brought up on stories her sister made up in the car and then westerns, and thrillers – everything from Mary Stewart through Helen McInnes, to Alistair MacLean and Desmond Bagley. She very clearly remembers the day she started Wilbur Smith’s When The Lion Feeds.

Kerry finished school in England and after dallying aimlessly around a bit was offered a temporary place in Victor Gollancz. She started in one department and finished, two and half years later, in publicity. After that she made a couple of breaks to advertising and sales promotions, but always ended up back in publishing … it just seemed to her that the people were more Her People.

She spent many very happy years at Sidgwick & Jackson’s quirky offices opposite the British Museum then moved into the freelance world. A couple of years and some lovely authors later, she found her way into Hodder & Stoughton – an empty office – and just stayed. She was married and the kids were young …

Kerry says that now they are not so young, and nor is she! She adds that she’s had a good career, and childhood, and marriage – she really wouldn’t change any of it – except maybe a little more confidence in her 20s. That was a shifting sands sort of decade.

A couple chatting on the pavement
A large grey and white fluffy cat in the window of the Barton Street wine bar
A no-entry sign
Creamy Bath stone buildings
A rather ornate black hotel bedstead
Quite a lot of blue sky
A framed, sheep-filled, landscape painting on the ceiling over the bed
A room-service menu (tempting)
A brass coloured old-fashioned telephone with a dial and a receiver resting on its cradle

Dogs
My husband
The countryside
Humour
Music
My car

Onwards!
Food
Wine
Film
Crime fiction (am I allowed this? If not, then sunrise)

Technology that is supposed to be intuitive and just … well.. isn’t.
People who have no idea of what is personal space on pavements or trains.

You will never believe how lucky you are – so don’t stop now.