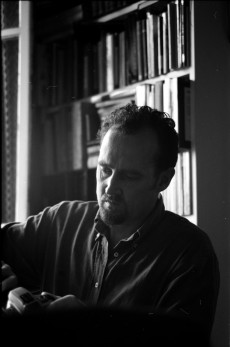 Tim Baker was born into a showbiz family in Sydney, and lived in Rome and Madrid before moving to Paris, where he wrote about jazz. He later ran consular operations in France and North Africa for the Australian embassy, liaising with international authorities on cases involving murder, kidnap, terrorism and disappearances.

His debut novel, Fever City, was shortlisted both for the CWA John Creasey New Blood Dagger and the US Shamus award for best first novel.

He has worked on film projects in India, Mexico, Brazil, Australia and China and currently lives in the South of France with his wife, their son, and two rescue animals, a dog and a cat.

The longest way round is always the shortest way home.

The four elements (water – the Mediterranean; fire – the sun; earth – the hills; air – the wind through the pine trees).
Looking in: Our cat (asleep in her bed on top of the chest of drawers).
Our dog (asleep on her rug beside my desk).
A small stack of TBR books (see question three).
On my desk:
My father’s Zodiac Sea Wolf watch, waiting to be wound.
A miniature porcelain statue of a Japanese scribe, a gift from my mother.

With only eight minutes, it has to be Capellini Belluogo for two.

Preparation: a pot of pre-heated water, and 200 grams of fresh salmon, free of bones and skin (smoked salmon can be substituted if preferred).

Put the water over a high jet and open a bottle of white wine. Pour yourself a glass; after all you’ve still got over seven minutes.

Add salt and a fistful of capellini to the water once it’s reached a hard boil.

Snip a bunch of chives with scissors and grate the rind of one lemon. You’re now beginning to run out of time, so better not refill your glass.

Drain the capellini after two minutes and transfer to a bowl. Add a generous amount of olive oil, then toss with the salmon and zucchini.

Mix in the chives, lemon zest and a teaspoon of capers, adding olive oil as required, and complete with both freshly ground pepper and chili pepper and a drizzle of lemon juice.

As imagination is always more fun than fact, they’d all be characters from fiction:
Hercule Poirot
Lady Brett Ashley
James Bond
Vivian Rutledge (aka Vivian Sternwood aka Vivian Regan)
DCI John Luther
Rebecca de Winter
Jay Gatsby – because with this lot, it’s going to be one hell of a bar bill.

Let’s have lunch in Italy.

The Past; the Future; Mexico; The Kimberley.

No matter what, never ever start feeding your dog at the dinner table.