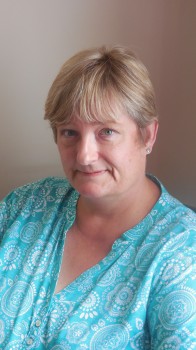 Diana Bretherick spent ten years as a criminal barrister and worked with offenders at Brixton prison. She is now a lecturer in criminology and the portrayal of crime in the media at Portsmouth University. She won the Good Housekeeping new novel competition in 2012 with her debut, The City of Devils.

prosecuting, defending, counselling, researching and writing about crime and criminals

plotting wall covered in post it notes, ceramic skull, Italian dictionary, book about Lombroso, cat sitting on book about Lombroso, a map of Turin, a cup of tea, a piece by local artist Joanna Dawson inspired by words from the beginning of my novel and a small model dalek.

It would have to feature fresh pasta which cooks quickly and is very versatile. I would probably keep it simple and toss it with some good olive oil, sautéed garlic, fresh tomatoes, basil and some chopped chilli – then cover liberally with freshly grated parmesan.

Lombroso, the world’s first criminologist – I don’t suppose I’d get a word in but it would be fascinating to see if my portrayal of him was accurate.
Mark Gatiss – He is one of my favourite writers and performers and we share many common interests – Victoriana, Sherlock Holmes, science fiction particularly Dr Who and horror films.
Sir Arthur Conan Doyle - he created the character of Sherlock Holmes in Southsea, Hants, where I live.
P.D James – I love her books and ever since I heard her demolish the BBC’s Director General Mark Thompson on the Today programme I’ve wanted to meet her.
Val McDermid – I met Val at an Arvon writing course and she is great company as well as extremely knowledgeable about the craft of crime writing.
Helena Kennedy Q.C. now Baroness Kennedy – a strong woman who speaks out against injustice in all its forms.
Chris Grayling – the current Minister for Justice. I want to tell him just how wrong he is about his planned cuts to legal aid.

I probably wouldn’t run anywhere. If I needed to escape I’d stay at home and pull the plug on my internet connection. If I had to go anywhere it would be an Italian city – I picture myself skulking in a cafe wearing a pair of dark glasses, trying (probably unsuccessfully) to give out an aura of mystery. If I needed peace then I’d go somewhere beautiful in the English countryside - Cornwall or Shropshire perhaps.

The Anatomy of Violence by Adrian Raine – a modern take on Lombroso’s ideas about the born criminal.
The Killing by David Hewson – I thought it would be difficult to make this fresh as it is based on the TV series. I was wrong.
Vengeance by Benjamin Black – the latest in a series of beautifully written crime novels set in 1950s Dublin. Anyone who thinks that there is no such thing as literary crime fiction should read it.

only two? Injustice in all its forms and the use of inelegant and meaningless expressions like ‘going forward’ or ‘knowledge transfer’..

if you want to be a writer then stop dreaming about it and get on with it.