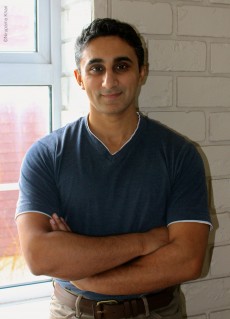 Vaseem Khan first saw an elephant lumbering down the middle of the road in 1997 when he arrived in India to work as a management consultant. It was the most unusual thing he had ever encountered and served as the inspiration behind his series of crime novels.

He returned to the UK in 2006 and now works at University College London for the Department of Security and Crime Science where he is astonished on a daily basis by the way modern science is being employed to tackle crime. Elephants are third on his list of passions, first and second being great literature and cricket, not always in that order.

The Strange Disappearance of a Bollywood Star is his third novel featuring Insp (Rtd) Chopra and his young sidekick, Ganesha, the elephant.

* A giant box of anti-bacterial wipes – I just love wiping down my desk. Gives me goosebumps.
* A yellow mug for The Unexpected Inheritance of Inspector Chopra, the first book in my series.
* A collection of elephants readers have sent me, including one whose bottom glows in the dark.
* My colleague Kati, who is building a house (not in the office, obviously).
* My lunchbox. Some awesome lamb rendang in there. Yum. * Extra-hot West Indian chill sauce. The only condiment I have ever loved or needed.
* My YouTube page, open in the corner of my colossal Mac screen, currently playing my ‘mellow’ playlist.
* My office bookshelf, crammed with riveting non-fiction such as The Oxford Handbook of Criminology.
* A hole punch which I always forget has the base missing and so all the little round bits fall all over the floor every time I use it. Every bloody time.

I believe in the ‘throw the kitchen sink at it’ approach to cuisine. But as I have no talent in this area, I’m thinking some sort of microwave nuked chicken veggie pasta with a load of mixed spices. Finished off with edible flowers, edible gold leaf, and edible foam, of course.

* Sachin Tendulkar, Indian cricketer.
* Amy Adams, best actress on the planet.
* Salman Rushdie, novelist.
* Rachel Allen, TV chef.
* Michael Connelly, crime author.
* Steven Spielberg, whose movies pretty much make up my childhood memories.
* Homer Simpson. (Or at least a man in a Homer Simpson suit. What a great ice-breaker for the other guests.)

* My lungs.
* My cricket bat.
* A large bottle of freshly squeezed orange juice.
* My 30-year-old dog-eared copy of The City and the Stars by Arthur C Clarke.
* My two-for-one Insider card at the local cinema. I love the movies. (But I hate paying full price).
* My pet elephant (just kidding).

* A cricket pitch, anywhere.
* Goa, India.
* Luxor, Egypt.
* The high Arctic, on a science expedition which runs into trouble, I get stranded in an ice blizzard, heroically battle the elements, rescue my fellow survivors, with possibly a hair-raising encounter with a polar bear thrown in.

* People who push in on the Tube train by shouting out ‘come on, there’s loads of room!’ even though you clearly couldn’t squeeze another atom in between the current lot of passengers.
* Tin can companies that still don’t put ring pulls on their cans. Hell’s too good for you.