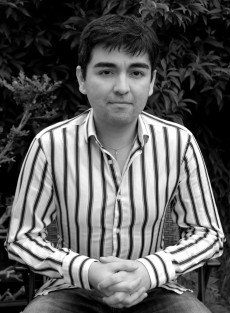 Oscar de Muriel was born in Mexico City in 1983, in the building that now houses Ripley’s Believe it or Not museum (some people claim to see a connection there …). He had a very happy childhood even though he did not try refried beans until he was six (he refused to eat anything brown and gooey).

He came to the United Kingdom to complete a PhD in Chemistry, working as a freelance translator to supplement his earnings (he was responsible for some Johnnie Walker ads for Colombia). During this time Oscar produced a handful of academic papers, and the idea of a spooky whodunit started to take roots in his head.

After several visits to Edinburgh, the city struck him as the perfect setting for a crime mystery. The entire concept of Nine-Nails McGray came to Oscar’s head while eating pizza with a couple of friends (guys, do you remember Cantina Los Perros and the sea monster?) For years Oscar had been meaning to write a story about the Devil’s Sonata (he’s a violin player himself) and it fitted perfectly as McGray’s first case.

Oscar currently lives in Lancashire in a lovely house that overlooks Pendle Hill, a field of limping sheep, and a very creepy-looking manor that he aspires to own one day.

My grandfather, who sadly passed away before I was born (nobody said I should stick to living people…)
Alfonso Cuaron, to talk him into directing the Frey & McGray movies
Joanna Lumley, to talk her into acting in the Frey and McGray movies
Val McDermid, for obvious reasons
CJ Sansom, for obvious reasons too
The Creature Trump, to drop some poison in his drink [nothing lethal, just incapacitating (though it would be hard to tell the difference…)]
Albus Dumbledore (nobody said I should stick to real people…)

My childhood bedroom
A tiny cabin in the Highlands with a nice fire, a pile of books and a well-stocked cava
St Michael’s Mount, if the island could be cordoned off just for me and a select group of friends/family
Real del Monte, so I can be in Mexico and not miss the British weather (wait, I’m not selling it well… the town is gorgeous)