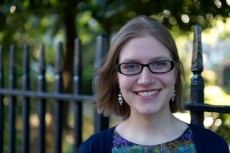 I’m answering this in December, and I’m in my living room, so: a Christmas tree, three advent calendars, two full bookcases, a paper chain, a mug of coffee and my laptop! That’s a pretty accurate representation of my life right now.

Eight minutes?! Scrambled eggs on toast with avocado. I can do that in my sleep (though I probably shouldn’t).

Do I get dead people as well as alive ones? If so, Agatha Christie, Dorothy Sayers, Josephine Tey, Fred Vargas, Gerald Durrell, Nadiya Hussein and Sue Perkins. Not all together, probably, that would be confusing.

My laptop (cliché, but that’s how I write, so I really can’t), my library (I think we’ve got over 1000 books, so I’m not exaggerating), thetrainline.com (while I’m on tour I pretty much live on trains), my phone (I work at home, so if I didn’t have a way to contact people I’d lose my mind. Plus, podcasts!), the cinnamon buns from Bageriet bakery in Covent Garden, my editorial team and my family (I’m counting them all as one thing, because there’s no way I could have this many books out, or any books out at all, without their support).

San Francisco (I was born in California, it feels like home), Venice, Edinburgh, Hawaii.

This should have been the ‘ten’ question! I’ve been shopping for Christmas presents, so: I bought Sarah Perry’s The Essex Serpent for my mum, We Found a Hat for my husband (it’s a picture book – we’re both a bit obsessed with Jon Klassen, and I’m convinced that I Want My Hat Back is one of the darkest murder mysteries ever written for children), and The Gracekeepers by Kirsty Logan for my grandma.

Adults assuming that a children’s book is either for girls or boys. They’re books! Anyone can read them – and it’s very good for kids to read about people who aren’t like them. And people making movies (especially movies adapted from books) where a non-white character magically becomes white. I just won’t go see it.

Dear 16-year-old Robin, do not worry that the stories you keep coming up with are not serious and Booker-winning. Do not worry that you want to write books for children, and your favourite things are murder mysteries. You are allowed to write whatever you want, and you should write whatever you want, because one day you are going to create a murder mystery series about kids which so many people will read that writing will become your job. Surprise!