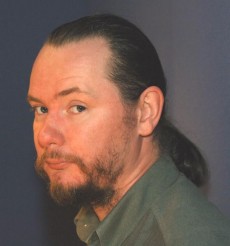 James Swallow is a British author and scriptwriter. A BAFTA nominee and a New York Times best-seller, he is the author of several original books and tie-in novels, as well as short fiction, numerous audio dramas and videogames.

His writing includes The Sundowners series of Western fiction steampunk novels, and fiction from the worlds of Star Trek, Warhammer 40,000, Doctor Who, 24, Stargate and 2000 AD. He lives and works in London

A little wooden model of Tintin’s rocket from Destination Moon.
A huge crow in my neighbour’s garden.
A framed print of the cockpit of a B-17 Flying Fortress (which was a gift from my parents).
A vintage 1950’s Verity Limit desk fan.
Cardboard boxes still to be unpacked from my last house move.
A filing cabinet festooned with notes and fridge magnets.
Overloaded bookcases with sagging shelves.
A 3-D printed model of my Xbox Live videogame avatar.
A brass wall plaque of a swallow in flight.

My infamous and utterly unhealthy fromage a trois omelette; three large eggs, a little black pepper, splash of milk and whatever three types of cheese I have to hand (maybe with some ham, too).

The South Bank in London; one of my favourite places to soak in the city.
Barney’s Beanery on Santa Monica Boulevard; I make a pilgrimage there every time I’m in Los Angeles.
The beachfront at Whitstable; being at the coast always relaxes me.
Sorrento in Italy; I love the food, the wine and the climate out there.

Tenacity, a thriller by debut writer JS Law set on a Royal Navy submarine.
How to Avoid Being Killed in a War Zone, a survival guide by war reporter Rosie Garthwaite.
The Man Who Stole The Cyprus, a historical account by Warwick Hirst of the life of a 19th century pirate who may be one of my ancestors.

Snobbery; in any form, in any place, from any walk of life.
Thoughtlessness; that kind of wilful ignorance of the circumstances of other humans.

“Hold fast, kid. Things are going to get good.”