We’re delicately mopping our brows this week and draping ourselves equally delicately over fans. In the words of the immortal Monty Python, it’s hot enough to boil a monkey’s bum …

Let’s see if we can rustle up some cool (see what we did there?) crime fiction. Linda Wilson, a dedicated wild swimmer, dived headfirst into one of her favourite series to wallow in the cold waters of the Thames with Sharon Bolton’s Lacey Flint, now working with the Marine Unit and under strict orders not to go swimming in the water she polices. A terrorist group is targeting women and all that they hold dear. When Lacey is in the right place at the right time to save a baby, their attention turns to her, Linda says The Dark is yet another superbly written high stakes police thriller from an author she loves.

And despite all her threats to file for a divorce from former Chief Constable Bob Skinner, Linda couldn’t resist the latest in Quintin Jardine’s long-running Scottish police soap. A spate of deaths in Skinner’s home village first seems nothing more than accidental, but a young copper isn’t so sure. Meanwhile, the new chief constable has a very delicate murder investigation on his hands. Linda says there’s an intriguing mystery and some shady skulduggery in Deadlock, and her divorce petition is on hold – again. Chris Roberts took a trip north of the border, too, for Fiona Erskine’s Phosphate Rocks, where a body is found in a chemical factory on Leith docks, together with ten objects that might provide vital clues to the death. Chris describes this as an unusual crime story and says he enjoyed the opportunity to brush up his knowledge of chemical processes.

A couple of books this issue left our reviewers scratching their heads at times. In another unusual crime story, a 19-year-old university student walks out of a party in the shared accommodation where she has been living for three months and is never seen again. True Crime Story by Joseph Knox left John Cleal a bit flummoxed, and he describes the book, where Knox is a character in his own novel, as ambitious but difficult to follow. In Something to Hide by Elizabeth George, the urbane Inspector Lynley is back and has to deal with the murder of a fellow police officer, against the backdrop of a campaign to banish the genital mutilation of young girls and women. Sylvia Maughan says the book is intriguing and informative but requires a lot of concentration, a big ask for something this long.

Linda Wilson enjoyed the Blair Witch vibe surrounding The Search Party by Simon Lelic and liked the harassed coppers trying hard to pry the truth out of a bunch of lying teenagers who decided to take matters into their own hands when one of their friends goes missing in the woods. Kati Barr-Taylor got on well with CJ Tudor’s The Burning Girls where a fresh start for the Rev Jack Brooks in the sleepy village of Chapel Croft comes complete with a murky past. Kati says this is a sharp story with leap-off-the-page main characters. Kerry Hood ventured into a supposedly haunted old house with chilling remnants of a long-dead witch that disturb its new owner’s peace. And she enjoyed the spookiness and brisk pace of Lisa Hall’s The Woman in the Woods.

The Cove by Alice Clark-Platts features two couples, each with two kids, who go on an island holiday together, but tensions quickly surface, made worse by island politics and monsoonal weather. John Verpeleti describes this as a blend of murder mystery and psychological thriller. The prolific and versatile Elly Griffiths didn’t disappoint Viv Beeby when she took a trip back in time to 1965 in The Midnight Hour (cue the song!), where Superintendent Edgar Stephens and magician-turned-actor Max Mephisto are investigating a horrible murder in Brighton. Viv says Griffiths is a good magician who excels at misdirection and, once again, she was fooled into choosing the wrong cup!

The trope of the drifter who rights wrongs is used to good effect by Mark Dawson in The Driver. John Milton is now in the US, doing his best to atone for the high body count he left behind in his work for the British government, but he can’t just walk away from a woman’s disappearance, not when he was the taxi driver who took her to the party where she went missing. Linda liked the main character and his inventive problem solving but wouldn’t want to get on his bad side. Also on the other side of the Pond, war veteran Peter Ash sets out to help a stranded woman and goes up a man prepared to eliminate anyone who stands in his way. Chris Roberts says The Runaway by Nick Petrie is a thrilling ride with plenty of action from start to finish. Chris also immersed himself in a very murky world in MS-13 by Steven Dudley, which documents the evolution of one of the most infamous street gangs on earth through the experiences of former gang members. Chris says the book sheds a welcome light on the matter, especially as attempts to tackle the phenomenon in the US have failed to gain traction.

Kerry Hood nips off Down Under and uncovers a book that she describes as both original and brilliant. In Emma Styles’ No Country for Girls, set deep in the badlands of Australia, two girls thrown together by circumstances not to their liking take off on the run from a killing and the theft of gold bullion.

Moral of this issue’s Scandi selection – watch your step if you’re a hack! Ewa Sherman describes My Name is Jensen by Heidi Amsinck as a compulsive read. Jensen is a Danish journalist recently returned to her native Copenhagen, who comes across a body of a young man who appears to have frozen overnight, but stab wounds tell a different story. Ewa liked the way the main character’s relationships are portrayed. There’s oodles of Nordic angst and trees (the snow is being a bit tardy) in Will Dean’s Bad Apples. Chris Roberts wasn’t quite so convinced by the novel where a journalist returns home to a decapitated corpse in the woods and investigates some strange goings-on in the nearby town. Chris liked the spooky goings-on but felt there was an excess of well-worn tropes. The Hideout by Camilla Grebe elicited something of a mixed reaction from Viv Beeby. A teenage delinquent has to leave town in a hurry and he takes refuge as a home help on a remote Swedish island that hides some sinister secrets. Viv says the book is a strange mixture of dark and gruesome Scandi crime, lyrical descriptions of the natural beauty of Stockholm's southern archipelago and lengthy biblical tracts.

Elsewhere in Europe, Silver Pebbles by Hansjörg Schneider features Inspector Peter Hunkeler who fears for the man he suspects of finding a package of diamonds in a sewer and sets out to find the originally intended recipient. Chris Roberts says the book, first published in German in 1993, remains entirely relevant in its political observations and still stands up very well. Sharon Wheeler, who is missing French holidays, settled down with a glass of passion fruit syrup to wallow in To Kill a Troubadour by Martin Walker. You know what to expect with the long-running Bruno, chief of police, series and this time the political meets the bucolic when extremist nationalists from over the border in Spain threaten the village of St Denis’ annual music festival. Sharon says there are a few too many information dumps for comfort, but admires Walker’s ability to meld the international elements into an ostensibly cosy setting.

On the teen front, Linda Wilson swapped the summer heat for the devastation of a meteorite strike in the distant past that wipes out a huge area of prehistoric forest. To survive, the clans must come together and find a way to bring the First Tree back to life. Linda says Michelle Paver has some lessons for today’s world, but never preaches, and Skin Taker is at its heart a romping good tale for younger readers and adults like her whose reading habits haven’t changed much down the years.

Author Tim Glister swelters gently under the Countdown spotlight this issue. His eclectic drinking chums have a distinct spooks aura about them. And yep, we echo his choice of a quick meal – it sounds perfect when you’re hot and bothered.
Do take a look at what our friends at Reviewing the Evidence have been up to and catch up with their latest reviews of US and Canadian releases.
If you’d like to be included in our fortnightly update email, drop us a line (the email address is on the site).
If you're following us on Twitter, you can find us chatting at 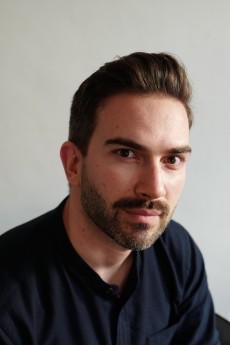 Tim Glister is a novelist who wishes he were a spy. Originally from the north east coast near Newcastle, he's lived in London for 15 years. He never had a Geordie accent, but the longer he's been down south the more he's started to sound like a 1970s newsreader.

He's worked in bookselling, publishing, tech, politics and finance for some famous brands – and some infamous ones. He has an encyclopaedic knowledge of Star Trek and is working on his building his knowledge of the Marvel universe. He's fascinated by Cold War stories, from the explosive derring-do of Ian Fleming to the grim all-too-realness of John le Carré. He can bake a mean chocolate and whiskey cake. He is a cat person.

My laptop, my notepad (I hand write/scribble a lot), a little ceramic owl from Hanoi, a sign that says ‘less is more’ by Mies van der Rohe, a Kurt Vonnegut print that says ‘there is a ceiling on human thought’, the giant brown cord egg chair I bought for £15 20 years ago and will never get rid of, a full coffee cup, an empty coffee cup next to the full one, an overflowing bookshelf.