So what were you doing 22 years ago? Your editors have scratched their heads, looked shifty and concluded they were probably having a riotous weekend in Birmingham with their writing group and consuming humungous amounts of Chinese food. Sometime ask Linda all about persuading the manager of the flats where we were staying that it was fine for us to move sofas up and down corridors …

Louise Welsh’s The Cutting Room, featuring thoroughly dissolute Glasgow auctioneer Rilke, was first published in 1999. It’s been re-published to coincide with the appearance of the second in the series, The Second Cut. At least we know the author has been gainfully employed in the intervening years – Linda Wilson is a fan of Welsh’s dystopian series. And Linda enjoyed both revisiting the old and then lapping up the new. She reports that Rilke has still got a wry attitude to life, a dry sense of humour and a knack for getting himself mixed up in things other people would sensibly walk away from.

Equally dark is Turf Wars by Olivier Norek, a former cop in the tough Seine-Saint-Denis district of Paris, which is where the book is based and where Capitaine Coste and his team come up against a new drug lord. Linda Wilson says it’s French noir at its darkest and it won’t suit everyone, so approach with caution, but she’s well and truly hooked. Chris Roberts describes Rider on the Rain by Sébastien Japrisot as unmistakably French, with the lead character being the chic woman familiar from cinema. He says the combination of noir and puzzling facts sustains interest. But if you fancy something a touch more bucolic, go for our old friend Bruno, Chief of Police and his patch in the heartland of France’s Dordogne region. Bruno’s Challenge & other Dordogne Tales features 14 short stories, and Linda says they’re mostly light and fun, but with the occasional darker gem that hints at the complexity and depth of one of the most beautiful regions of France. Georges Simenon is a big favourite among our reviewers, who have been working their way through the Penguin reissues. Chris Roberts says that The Little Man from Archangel, where a man finds himself suspected of murder by neighbours who he always regarded as friends, as usual demonstrates Simenon’s mastery of the human condition.

Our reviewers’ whistle-stop tour of Europe then reaches Italy. Sylvia Maughan wasn’t overly impressed with The Favour by Laura Vaughan, where a student dies on a trip, saying that the setting felt wasted and the characters were uninspiring and unrelatable. Ewa Sherman and Kerry Hood both had better luck with this week’s Scandi releases. In Gustaf Skördeman’s Geiger, grandmother Agneta Broman answers a phone, hears only one word then shoots her husband and disappears, leaving the police at a loss. Ewa describes the book as a complex and well-crafted spy thriller, with plenty of fascinating details and realistic characters. Kerry says The Ice Coven by Max Seeck, where a man and woman go missing in Finland and drop Helsinki police into a world of pain and depravity, is a cracker of a read – and she was delighted that she didn’t see the reveal coming

Put your seat belts on, as it’s over to the US next for books from three of the genre’s big hitters. Chris Roberts ventures into the world of the late Robert B Parker, now with Mike Lupica at the helm of Fool’s Paradise. He says that there is something comforting about Parker’s world, if you disregard the somewhat spectacular death rate! The characters are familiar and the patter is generally entertaining and agreeable, although he’s not sure Stone’s relationship with Sonny Randall will last! Michael Connelly is back, with the latest Harry Bosch adventure. John Verpeleti says that The Dark Hours isn’t his best, but it’s nonsense-free and generally without silly heroics. The fact that there’s incremental progress with cases rather than a reliance on single late lightbulb moments to solve crimes appealed to John. Another Kind of Eden by James Lee Burke features a Korean War veteran looking for freedom and enlightenment in the American West in 1962. He falls in love with an art student, but things spin out of control when he meets a psychopath. Timothy Field wasn’t convinced by the magical realism.

It's a quiet issue for historicals, but Chris Roberts reports back on Hell Gate by Jeff Dawson, where Ingo Finch visits New York in 1904 on behalf of British spy masters to expose the machinations of pro-German agents in the US. He says it’s a robust adventure set at a time and place where life had plenty of rough edges, with a few historical details thrown in for interest. And Graham Hurley has deserted Portsmouth for the Soviet Union in 1942 where propaganda journalist Werner Nehmann is sent to Stalingrad to put a gloss on the battle that marked one of the turning points of the war for the German people. John Cleal says that Last Flight to Stalingrad is gripping, realistic and insightful.

There are some spies with a distinct difference in The Man Who Died Twice. And we’re wondering if there’s anyone on the planet who hasn’t read Richard Osman’s charming series with its intrepid elderly heroes! This time they’re on the trail of £20,000,000 in stolen diamonds and some violent and ruthless international criminals. Viv Beeby describes the book as pure entertainment and says that Osman writes about the most unsavoury characters with such wit.

If you fancy some decent thrillers, David Rose says that Charles Cumming’s books are always a treat and that Judas 62, where secret agent Lachlan Kite faces peril in Dubai as a brutal ghost from his past works his way down a Russian kill list, is one of his best. And former Labour deputy leader Tom Watson has put his experience in the highest political spheres to good use in The House, written with Imogen Robertson. A Labour MP receives a demand to withdraw a parliamentary question, under threat that his role in the tragic case of a former colleague will be exposed in the press. Chris Roberts says that Westminster is realistically depicted here with its frenetic pace and vituperative relationships.

Elsewhere, we’ve let John Cleal loose on Scottish crime fiction and he reports back approvingly on Before the Storm by Alex Gray, the latest in the long-running series featuring Superintendent Bill Lorimer, head of Police Scotland’s Major Incidents team. This time out, he’s investigating the exposure of undercover officers while at the same time facing a terrorist threat to Glasgow. John says it’s an absorbing and thoroughly entertaining procedural filled with great characters and a fine sense of place. Kati Barr-Taylor wasn’t so lucky with the characterisation in SK Barnett’s Safe, where Jenny, kidnapped as a six-year-old, is back. But 12 years have changed her. Kati found the characters to be underdeveloped and hard to connect with.

Linda Wilson was charmed by the portrayal of the world of fandom in Ava Eldred’s The Boyband Murder Mystery. When the frontman of boyband phenomenon Half Light is arrested on suspicion of murdering his best friend, his army of fans are determined to prove his innocence. Linda was completely captivated by both the characters and the plot and says that Eldred’s convincing and well-written story about a bunch of teenagers determined to solve a mystery will appeal to anyone who has ever sought out people to happily obsess with over a shared love.

Please welcome Icelandic writer Lilja Sigurðardóttir to the Countdown hotseat. We’re most intrigued by her collection of spooky objects. And we like the fact she’s taught us some Icelandic words – Sharon says they’re considerably more useful than the Old Icelandic ones she learned at uni!
And in the meantime, take a look at what Reviewing the Evidence have been up to and catch up with their latest reviews of US and Canadian releases.
If you’d like to be included in our fortnightly update email, drop us a line (the email address is on the site).
If you're following us on Twitter, you can find us chatting at 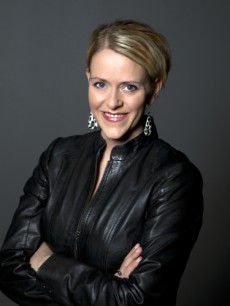 Lilja Sigurðardóttir was born in Akranes, Iceland, in 1972, but spent much of her childhood living in far-flung places, such as Mexico, Sweden and Spain, as the family moved for her father’s job. She has nine books under her belt (five of which have been translated into English), as well as a stage play and a few screenplays, the most notable of which is the Netflix light sci-fi thriller Katla.

She currently lives in a house on the outskirts of Reykjavík with her partner and dog, and when she isn’t writing or travelling to promote her writing, she raises chickens in her backyard, grows potatoes and goes fishing. Six chickens were purchased in the first lockdown – for food and company – and she’s become very fond of them. She provides them with leftovers and they supply her with eggs – a good deal for everyone!

Lilja also loves to cook and is quite good at inventing recipes that contain fish, potatoes and eggs – in fact, she is even thinking of publishing a cookbook. But it would of course have to have a crime theme!

My dog Dr Árni, who snores by my side.
My 16th century Mexican scull, Malinche.
My coffee cup (empty now, unfortunately.)
My diary. Blissfully empty for the next ten days as I am going on holiday.
My phone. A distraction as it is a gateway to news and social media.
The computer screen in front of me.
A polished stone from the black beach in Vík I took when location hunting for Katla (watch it on Netflix),
The pre-publication proof copy of my latest book out in English: Cold as Hell.
The African Voodoo doll in my window. Yes, I like spooky things.

Eggs. Probably scrambled. I go out to my chicken coop every day to get fresh eggs. Lovely.