Taps the microphone … Can you hear us at the back? Testing, testing, one, two …

Welcome to Crime Review, a new venture devoted to book releases from UK publishers. It's edited by experienced reviewers Linda Wilson and Sharon Wheeler (some of you will know us from our long association with ReviewingtheEvidence), and we have a fabulous team of reviewers on-board, who are passionate about the genre.

We'll be along every fortnight with 12 new reviews and an author interview. For our debut outing, please meet Peter Robinson, the creator of the very splendid DCI Banks series. All we can say here is that we hope he found the interview easier than we did! Now, without further ado, let's present to you this week's reviews.

There's a distinctly Italian feel for our first edition. On the audiobook front, Sharon Wheeler was hooked by Christobel Kent's The Dead Season, set in a sweltering Florence summer – and it took her a while to realise that actually not much was happening! On to Venice, and Sylvia Wilson welcomes Donna Leon's The Golden Egg, the 22nd book in the Commissario Brunetti series. John Cleal, meanwhile, finds much to praise in Diana Bretherick's debut novel City of Devils, set in 19th century Turin.

Also looking overseas, Chris Roberts was impressed by MD Villiers' dispassionate style in City of Blood, which is set amidst South African gangs.

On the police procedural front, Linda Wilson is pleased she persevered with Luke Delaney's Cold Killing. And she reports on a solid addition to the Tom Thorne series in Mark Billingham's The Dying Hours, where our maverick hero has been bounced back into uniform.

The prolific Karen Rose features a state attorney searches for her missing son and his girlfriend in Did You Miss Me? Sylvia Maughan reports that the author really keeps the tension going.

You know what they say about topics to avoid at the dinner table … Our crime writers don't fight shy of examining them. On the thriller front, Arnold Taylor praises Gerald Seymour's The Corporal's Wife, which takes on politics and religion. And Chris Roberts notes the feel for the period and the characterisation in Laura Wilson's The Riot, set amidst the racial tension of 1950s London.

Elsewhere, Maddy Marsh praises Barry Lyga's foray into adult fiction from the world of young adult writing in I Hunt Killers, based on the son of a serial killer. And John Cleal welcomes newcomer Emily Winslow, whose The Start of Everything, set in Cambridge, sets the reader some challenging puzzles.
We hope you enjoy the reviews and interview. Follow us on Twitter

, and please pop back in a fortnight for our second issue. Also, don't forget to take a look at the latest interview and reviews on Reviewing the Evidence. 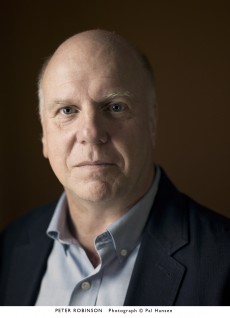 Peter Robinson was born in Yorkshire. He obtained a BA in English Literature from the University of Leeds then went to Canada where he obtained an MA in English and Creative Writing, followed by a PhD in English at York University in Toronto. His first novel, GALLOW'S VIEW, in 1987, introduced the character of Detective Chief Inspector Alan Banks and since then Banks has appeared in numerous books, with CHILDREN OF THE REVOLUTION appearing in 2013. Robinson has also written several standalone novels and in 2002 was awarded the Crime Writers' Association Dagger in the Library. He divides his time between Toronto and North Yorkshire.

Two people talking outside the front window. Trees, hills, the River Swale and Richmond Castle. A computer screen. A half-full teacup. An iPod dock. Bookshelves with lots of books, CDs and DVDs. A shredder. A leather satchel. A ticket for State Railway of Thailand, The Trans-River Kwai Death Railway.