Come on, admit it, who’s old enough to remember settling down in the afternoon to watch Crown Court on the telly? No? Then maybe you’ll admit to being addicted to Judge Rinder … Don’t worry, we won’t hold it against you.

Chris Roberts has been up to his neck in his favourite courtroom action this week starting with Bad Debt by William McIntyre which sees Robbie Munro agree to defend a man who assaulted a housebreaker, but things take a very different turn when the lawyer finds himself on the receiving end of a murder accusation. Chris particularly liked the wry comments and amusing character asides. In Forced Confessions, William Benson defends a man against a charge of murder, while his friends investigate the circumstances behind Benson’s own conviction, for which he served 11 years in jail. Chris was interested to see John Fairfax bring the story of how his main character ended up in prison to a conclusion and he enjoyed Benson’s scintillating performance in court.

In Post Mortem by Gary Bell, Elliot Rook QC and his protege Zara, represent victims of a vicious campaign for supremacy by a London drug tsar. Chris says there’s enough here to satisfy even the most ardent lawyer groupies, but the lack of courtroom drama was rather a disappointment. Sylvia Maughan thoroughly enjoyed The Measure of Time by Gianrico Carofiglio, which sees Italian lawyer Guido Guerrieri contacted by an old girlfriend who believes her son has been wrongly convicted of murder. Guido needs to decide whether it’s wise to take on the appeal. Sylvia says the book is well-written and full of interest.

With the nights rapidly drawing in and fireworks starting to go off everywhere, we’ve got some explosive action to liven up the dark evenings. Linda Wilson enjoyed Zoë Sharp’s Trial Under Fire, the prequel to her Charlie Fox series which takes her kick-ass main character back to the tour of duty in Afghanistan that earned her the chance to try the gruelling Special Forces Selection process. Linda enjoyed the slick, edge-of-the-seat action scenes, and the skilful portrayal of a younger version of Charlie who has yet to acquire her flint-hard edge and says Sharp once again amply demonstrates that she can more than hold her own in the testosterone-fuelled world of military thrillers. Linda also liked Hour of the Assassin by Matthew Quirk, which sees security consultant Nick Averose trying to avoid taking the fall for a crime he didn’t commit, while an ambitious senator and his ruthless backer are making a bid for the presidency. Linda enjoyed the vivid action and the interesting but not always likeable characters. She’s also willing to bet that Quirk’s hero changes his underwear more often than Jack Reacher!

Chris Roberts liked The Chill Factor set in Cold War Iceland, where a Russian spy ring is fostering local discontent amongst the American military based there. He says there’s plenty of excitement here with a typical 1970s action hero and comments that Richard Falkirk’s writing is reminiscent of his contemporaries such as Alistair MacLean, Gavin Lyall, Len Deighton and Ian Fleming.

Kerry Hood advises equipping yourself with a stiff gin before starting The Guest House by David Mark as you’ll be in for quite a ride when a single mother running some rooms to let becomes unwittingly involved with local – and not so local – gangsters, shattering her fragile peace in the remote Scottish Highlands. In SJ Watson’s Final Cut, a successful documentary film maker returns to the run-down seaside town where she was born and finds herself up to her neck in its extraordinary and chilling secrets. John Cleal found it hard to become invested in the story due to the sketchy presentation of the characters. Trust Me by TM Logan didn’t quite live up to John Verpeleti’s expectation that an author should play fair with the portrayal of their characters, but he found plenty of excitement in this pacey story of a woman who abandons her baby with a stranger on a train, with a hidden note instructing her to trust no one, not even the police.

Kati Barr-Taylor enjoyed the quirky characters in Sarah Jane Brazier’s If I Disappear where a woman’s obsession with a missing podcaster takes her in a journey into the wild where the only certainty is death. Kati predicts you’ll gallop through this in one sitting. The Gilded Cage by Camilla Läckberg sees a woman ready to kill to protect what she values most when her illusion of a perfect life starts to fall apart. Ewa Sherman says that is you can suspend a certain amount of disbelief you’ll enjoy this slick girl-power story of women working together.

For our police offerings this week, our reviewers have been doing some globe-trotting. In The Coral Bride by Roxanne Bouchard, a Canadian lobster trawler is found adrift with the captain missing. DS Joaquin Morales is regarded by the locals as an urban interloper, which certainly doesn’t help the progress of his investigation. Chris Roberts liked the easy-going but earnest policeman and the fierce, independent, and sometimes humorous characters he comes up against. Down Under, in The Stoning, Detective Sergeant George Manolis is sent back to the outback town where he grew up to investigate the horrific murder of a popular local schoolteacher. John Cleal says the town of Cobb and its inhabitants provide an atmospheric, gritty and menacing background with a wonderful sense of place in Peter Papathanasiou’s excoriating condemnation of prejudice and institutionalised racism.

Closer to home, in the second of Ann Cleeves’ new series set on the beautiful North Devon coast, things take a decidedly sinister turn when a local doctor is found dead with a shard of glass sticking out of his neck only hours after wanting to talk to a police officer at a party. DI Matthew Venn and his West Country team investigate the killing. Viv Beeby says The Heron’s Cry is a rewarding mystery with an interesting and developing investigative team, a great location and the promise of more good stories to come.

John Cleal took a trip back in time to 1144 to meet up with one of his favourite crime-fighting duos, Worcester Undersherriff High Bradcote and his grumpy sidekick Sergeant Catchpoll. The pair are investigating the murder of a woman whose body is found on an island in the Severn. John Cleal says River of Sins by Sarah Hawkswood is as much a tale of personalities, relationships, ambition and class differences as it is of murder. John is joined this week on the history beat by new reviewer Timothy Field who enjoyed Andrew Taylor’s The Last Protector, in which James Marwood and Catherine Hakesby go up against George Villiers, Duke of Buckingham, as he seeks to exploit the return of the fugitive Richard Cromwell, late Lord Protector of England. Timothy says the narrative is engrossing from the start and builds steadily to a gripping climax and a deft, satisfying denouement with the final scene beautifully staged to pause this enjoyable saga ready for the next instalment. We’re delighted to welcome Timothy on board!

Linda Wilson has always been a great fan of Robert B Parker’s Spenser series and says that following his death, Ace Atkins has proved that it is possible to continue an author’s work and do justice to their characters. Someone to Watch Over Me sees laconic Boston PI Spenser and his latest apprentice, Matty Sullivan, go up against a billionaire with some very unsavoury habits and equally unsavoury friends to take down a network of rich, powerful people who are abusing young girls. Linda enjoyed seeing Spenser and the inimitable Hawk in action against some very heavy opposition. There’s just one line that must never be crossed, so far as she’s concerned - nothing bad must ever happen to the dog! Also on the other side of the Pond, in When You See Me, Detective DD Warren needs back up when a body is found in the hills outside Niche, as the discovery points to the work of a notorious serial kidnapper. Kati Barr-Taylor feels Lisa Gardner’s protagonist gets lost amongst the plethora of other characters and found too much repetition and padding in the story.

On the teen front this week, Linda Wilson enjoyed The Cheerleaders by Kara Thomas where a girl sets out to uncover the truth about her sister’s supposed suicide as well as the double murder and subsequent car crash that five years ago shocked her hometown to its core. Linda describes this as a well-crafted, very satisfying murder mystery with sympathetic characters and a great plot.

We welcome author Paul Cleave to the countdown hotseat. Bitcoin still doesn’t make any sense to us, but we’ll happily eat toasted sandwiches with him all day!

Take a look at what Reviewing the Evidence have been up to and catch up with their latest reviews of US and Canadian releases.
If you’d like to be included in our fortnightly update email, drop us a line (the email address is on the site).
If you're following us on Twitter, you can find us chatting at 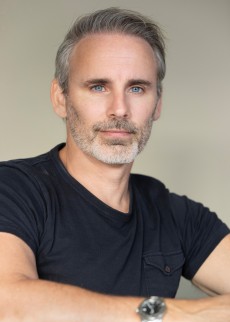 Paul Cleave was born and raised in New Zealand but likes to float around Europe for a month or two every year to escape the Christchurch winters. He travels with a frisbee, throwing it in as many countries as he can, with the goal to reach 50 before he turns 50. His report card from high school told him there was a time and a place for his kind of writing – and high school wasn’t it – in part based on his short story where Santa was a heroin addict who threw elves into a shredder to turn into toys. He took up tennis too late in his life to be any good at it and took up golf when he was young enough to be good at it but simply isn’t. He knows a handful of card tricks, can solve a Rubik’s cube, and once accidentally spun a car 360 degrees at a funeral, covering family and extended family at the graveside in mud.

Hopefully I’m much closer to the beginning than the end.

A bobblehead Gorn (think Star Trek) holding a dagger. A King Kong Escapes poster. A cat. My napping couch. Another cat. An orange-and-blue dragon hanging from my ceiling. A Star Trek ‘Operation Annihilate’ poster. A cat toy. The top of my neighbour’s roof.