One of your editors has been binge reading thrillers this week (hint, it wasn’t Sharon!) So sit back and prepare for a dose of willy-waving action! Ooh, wait a minute, what’s the equivalent when it’s a female lead character? Ahem, moving swiftly on …

Linda Wilson can never resist anything by ex-SAS hardman Chris Ryan, so Zero 22 shot to the top of her reading pile. An ambush leaves Danny Black the sole survivor of his unit, so when he’s offered the chance to get revenge, he jumps at it. Linda says Ryan is in the top-rank of military thriller writers and shows no sign of slipping down a grade and nor does his main character. It’s good to see not all thrillers being written by men about men and in Fiona Erskine’s The Chemical Reaction, chemical expert Dr Jaq Silver is in desperate need of some dosh to pay off her debts, so when she gets offered a job that involves a trip to China, she doesn’t have a lot a choice – but things quickly turn more complicated than she expected. Linda thought this was a convincing thriller with an unusual edge but she did mutter darkly about some gratuitous animal cruelty.

Former soldier John Cleal was less convinced by Rob Sinclair's Imposter 13 in which a former terrorist, now working with MI6, infiltrates a sinister new terror cell that’s planning a series of devastating worldwide attacks. Despite the book being well written and fast paced with an almost obligatory high body count, John says there’s too much unnecessary and gruesomely excruciating detail and on top of that, the story just has too many gaps. Linda Wilson had some reservations about Scar Tissue by new kid on the block Ollie Ollerton and his former special forces operative Alex Abbott who’s on the hunt for his missing son in war-torn Iraq. Abbott’s drinking and resulting lack of professionalism didn’t endear him to her. She was very enthusiastic, though, about the return of Anthony Horowitz’s reluctant teenage spy Alex Rider in Never Say Die. Alex, traumatised by the murder of his best friend and guardian, is determined to learn more about her death, even if his quest might extinguish the tiny flicker of hope kindled by an inexplicable email. Linda says this is a stunning return for Alex, with one of the best action sequences she’s read. In her view, this particular teenager is set to snatch the laurels from the heads of his adult counterparts!

Viv Beeby enjoyed Elly Griffiths’ second standalone, The Postscript Murders. Ninety-year-old Peggy has two main interests in life – observing the comings and goings beneath her bay window in Seaview Court and murder. So when Peggy is found dead in her favourite chair, notebook by her side, her friends turn sleuth, with the help of DS Harbinder Kaur. Viv says Griffiths writes so well about her people, with real warmth and wit, that the story zips along with a lightness of touch. Elsewhere on the cop front, DC Charlie Stafford and her team are desperate to find a gruesome serial killer in The Trophy Taker by Sarah Flint. Despite the book’s grisly subject matter, John Barnbrook praises the deft, diverse characterisation as well as the believable professional relationships and plausible motives.

We keep promising Kati Barr-Taylor time off for good behaviour when it comes to psychological suspense – but then we slip a few more onto her reading pile! In The Flight by Julie Clark, two women meet in a brief encounter at JFK Airport, New York and their destinations could well be their last. Kati says the action, suspense and introspection explode from the page immediately, but she found it increasingly difficult to connect with the main character. In Jo Jakeman’s Safe House, Charlie has a new life to go with her new name, but her past is closing in. Kati enjoyed the thought-provoking story, but had some reservations about the ending. New names feature in Call Me Evie by JP Pomare, as well. A quiet beach town should be the place where Evie can heal. But Evie isn’t her name, and she is not there of her own free will. For Kati, the book was let down by too much padding and an anti-climactic reveal.

In the wake of the US election result, Chris Roberts decided a trip to the other side of the Pond was in order. In Tom Bouman’s The Bramble and the Rose, cop Henry Farrell is called in when a body is found, thought to be the victim of a bear. But events prove there is more than one predator in the woods. Chris praises the excellent pacing and authentic dialogue. He was equally impressed by Thomas Mullen’s Midnight Atlanta, set in the turbulent 1950s. When the black owner of the Atlanta Daily Times is shot and killed, reporter Tommy Smith is determined to find the culprit. Chris describes this as a gripping story told with impressive skill. Broken by Don Winslow contains six short stories set in the US featuring people on the wrong side of the law and those who oppose them. Chris says Winslow is an excellent writer and an absolute joy to read with plenty of action, humour and pathos in every story. If you’ve not come across Winslow before Chris insists this would be an excellent place to start.

Further afield, Chris returns to his old stamping ground of Hong Kong for Second Sister by Chan Ho-Kei. A woman is devastated when her younger sister jumps from their tenement flat to her death and goes in search of someone who can help her satisfy her desire for revenge on the people who drove her to it. Chris found the book to be very readable, despite too much tell rather than show and an overly naive protagonist. The slow release of revelations and developments sustained his interest and built to an unexpected conclusion. Ewa Sherman headed over to her beloved Scandinavia for The Summer of Ellen by Agnete Friis where there's a clash between the realities of modern Copenhagen and of Jutland farmland from the 1970s as a man return to the area he has not visited for nearly 40 years in the wake of a bitter divorce. Ewa enjoyed the tense narration, evoking bygone times and conflicting lifestyles. In Cast No Shadow by Julie Newman, a young journalist investigates the story of an Indian hotelier cleared of a rape charge when he is revealed to be a she. The trail takes the reporter into the dangerous Indian underworld, where money always talks – and life is cheap. John Cleal thinks the book misses a chance to make an important point about a bigger picture

John Cleal is back on the historical beat this week. When the Prince of Powys’ messenger fails to reach his English destination in Faithful Unto Death by Sarah Hawkswood, lord sheriff’s men Bradecote, Catchpoll and Walkelin must check a dead man’s identity. John enjoys Hawkswood’s ability to mix humour with the complexities of life and praises her crisp and descriptive writing as she switches between action, reflection, personal feelings, description and even gossip with effortless ease. Jumping forward in time to 1924, in Invitation to Die, DI John Redfyre discovers a body and uncovers a story of wartime betrayal and multiple murders. John says Barbara Cleverly scores with her sure knowledge of the social conditions, science and slang of this transitional period in British history, although he’s concerned that the lead suspect seems at times far more interesting than her protagonist. John was very enthusiastic about The Corpse in the Garden of Perfect Brightness by Malcolm Pryce, in which railway detective Jack Wenlock, thrown out of work by the 1947 nationalisation of the industry, searches the Far East for his mother, whom he has always believed dead. John describes the book as full of the imagery, language and attitudes of the time.

Elsewhere, Chris Roberts enjoyed House of Correction by husband and wife writing team Nicci French. A woman arrested for a man’s murder has little recollection of events, but is convinced she’s innocent, although it seems everyone else believes she is guilty. Chris says the flawed main character still manages to engage sympathy rather than alienate and the book provides a different and engaging approach to courtroom drama.

Author Harriet Tyce is in the Countdown hotseat the week. We hope she won’t mind us inviting ourselves round to tea, as we like the sound of cheesy peasy pesto pasta – and we promise not to chew our food too loudly, honest! 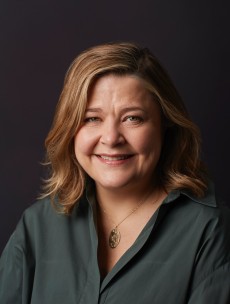 Harriet Tyce grew up in Edinburgh and studied English at Oxford University before doing a law conversion course at City University, which was probably the worst career decision of her life. She practised, badly, as a criminal barrister in London for nearly ten years but left after having children.

After spending some years in the doldrums she started to write, and recently completed an MA in Creative Writing (Crime Fiction) at the University of East Anglia, during which time she wrote Blood Orange, drawing on the hangovers and numerous journeys to far-flung magistrates’ courts across the south east of England as background material. At least that legal training didn’t go entirely to waste.

She now lives in north London with her husband and children, and enjoys writing books about lawyers far more than actually being a lawyer in real life.