When a spaceship lands on Mars, the explorers will no doubt find a Great Western train running an hour late, James Blunt reprising his one song, and the Martians reading domestic noir …

That side of the genre shows little sign of flagging – although most of our reviewers now look long-suffering if we approach them waving review copies of the latest books featuring paranoid wives, dodgy husbands, brattish kids and the dream house that isn’t … So pass Kati Barr-Taylor a large gin for braving two this issue. In Bad Seed by Jessica Eames, a recently widowed woman is trying to pick up the pieces of her life, but someone seems to be out to stop her succeeding. Kati didn’t get on with the characters, but still described this knotty domestic noir as fresh and fun, albeit it in a kind of non-funny way. She had similar issues with The Night Before in which a woman doesn’t return home after a blind date, leaving her sister worried that something terrible has happened. Kati admits that author Wendy Walker could well become her new guilty pleasure. In Unfollow Me by Charlotte Duckworth, a social media influencer’s online accounts suddenly disappear and her distraught fans try to find out what’s happened to her. Sharon Wheeler isn’t a fan of domestic noir at the best of times and in this instance didn’t feel anything for the characters. But she says the book is redeemed by its sharp take on the skewed world of social media influencers, whose seemingly picture-perfect existence can hide a deeply flawed core.

If you want weird families, give Death of a Mermaid by Lesley Thomson a go. It follows the story of Frederica ‘Freddy’ Power’s return to her childhood home after 22 years where she has to confront her past and face unpleasant truths about her family. John Cleal enjoyed the clever plotting interspersed with gentle humour, as well as the well-drawn characters and an strong evocation of place. Old favourite Vera Stanhope makes a welcome return in Ann Cleeves’ The Darkest Evening. The body of a young woman is discovered in the grounds of the Stanhope estate – not that Vera has had much to do with the family pile! Viv Beeby praises an atmospheric story full of snow, glowering skies, bleak moors and woodlands dotted with remote farmhouses. She’s certain this won't disappoint Vera fans and says the book certainly didn’t disappoint her.

This issue’s other UK police procedurals go north of the border. We usually keep John Cleal away from the Scottish stuff (long story, don’t ask!), but he’s a fan of Alex Gray’s Bill Lorimer series. When Shadows Fall, which features the murder of former police officers, meets his exacting standards, and he praises Gray’s research, eye for detail and the fact she offers some of the best descriptions of police ops that he’s read. From the Shadows by GR Halliday has its fair share of brutality, with a serial killer stalking the Scottish glens, leaving mutilated bodies carefully posed, each containing a macabre memento. DI Monica Kennedy needs to track down whoever is responsible before the deaths mount up even further. Linda Wilson found the constant references to the detective’s height repetitive and unnecessary, but says Halliday has produced a solid story with a brooding sense of place and a likeable main character.

Ah, conspiracy theories … Dan Brown has a lot to answer for, as another long-running genre trope is still breathing (just about!) Our reviewers don’t often dip their toes into the murky waters of conspiracy thrillers but despite that, John Barnbrook enjoyed False Prophet by James Hazel, which features a serial killer who drives a nail through the forehead of their victims and then displays the bodies with messages in blood. John says old manuscripts, eccentric intellectuals, wealthy collectors and manic zealots are common plot devices, but this book handles them all with panache, enthusiasm and believability. And of course you can’t have a conspiracy theory thriller without a stray pope or two – except that Linda Wilson says Maggie Hamand’s Virgin & Child, featuring a new Irish pontiff who’s attacked by a woman in St Peter’s Square, takes a very sharp left turn away from political thriller territory. Linda was sold on the book’s premise which is carried off with consummate skill and style. In The Nemesis Manifesto by Eric van Lustbader, American democracy comes under threat and lone wolf black ops field agent Evan Ryder must find out why her fellow agents are being systematically eliminated. John Cleal praises the credible action and often near-lyrical prose which supports a complex, intelligent plot.

If you want some unusual investigators, check this one out (see what we did there!). Linda Wilson was happy to queue up for the return of supermarket workers Ant and Bea in Rachel Ward’s Expiry Date. When a woman’s body is discovered during building works, Bea Jordan is worried that it might be one of her customers who she hasn’t seen for a few weeks. But the body has been there longer than that and proves to be connected to Bea’s in a very unexpected way. In Linda’s eyes, Ant and Bea are the most entertaining pair of amateur investigators in crime fiction. She says they’re fresh, lively and very relatable. The Lizard by Dugald Bruce-Lockhart tells the story of a student in Greece for the summer looking for a change of atmosphere who gets more adventure than he expected. Chris Roberts liked this story of an innocent young man who displays surprising mental and physical resilience. Chris also liked The Rip by Mark Brandi in which a young woman living on the streets of Melbourne comes under threat when someone new shows up and disturbs the precarious stability of her life. Chris warns that the book is a powerful evocation of someone whose weakness in confrontation with evil makes for a difficult, horribly convincing read.

Scandi queen Ewa Sherman was impressed by Jesper Stein’s Die for Me, which features maverick DI Alex Steen who can’t let go of an unsolved case that destroyed his own life four years ago. When DNA evidence from recent rapes in Copenhagen links the perpetrator to the killing, Alex is desperate for one more chance to try to solve the case. Ewa describes this as a gripping, addictive and unforgettable read that doesn’t shy away from the brutal reality of the crimes it depicts. In Murder Your Darlings by Mark McCrum, a group of people gather in an Italian villa in Tuscany for a summer writing course. One of them is found dead in the sauna and murder is suspected. Sylvia Maughan says the book is very readable with realistic dialogue, but she didn’t get much of a flavour of her favourite holiday destination from the story.

On the historical front, a Garda Special Branch Inspector goes undercover in The City in Flames by Michael Russell to investigate a plot to assassinate the Irish president. John Cleal says this multi-layered, intricately plotted story captures the unique complexity of Ireland’s divided wartime loyalties and enmities with clarity and intelligence. John is always on the look-out for forgotten classics. He felt that The Perfect Alibi isn’t Christopher St John Sprigg’s best book, but the complicated locked room mystery from the 1930s concerning the death of an industrialist after a fire still holds appeal, with its unbreakable alibis and romantic sub-plots. Chris Roberts describes City of Ghosts by Ben Creed, in which a young Russian militia lieutenant is called to a nightmarish scene of five corpses and finds that the victims have links to his own past, as a gripping tale set in a convincing historical context.

Elsewhere, Two Lives by A Yi contains seven short stories from China, in which the setting comes through very convincingly. Chris says this is a challenging collection that demands attention. Linda Wilson very much enjoyed her foray into an unusual YA debut, Boy Queen by George Lester, which follows the story of budding thesp Robin Cooper, whose world falls apart when he’s rejected by the drama school he’s set his heart on. Much to his own surprise, Robin finds unexpected solace in glitter, glamour and the world of drag. Linda describes the book as funny, perceptive, heart-warming, heart-breaking, compelling and impossible to put down. She says this is a brilliant and assured book told by someone who is a part of the drag community.

Our Countdown interview this week is with Sara Sheridan. We like her idea of bringing very eclectic drinking companions back from the dead. And we echo the six things she can’t live without – ahem, we may be perfume queens as well! 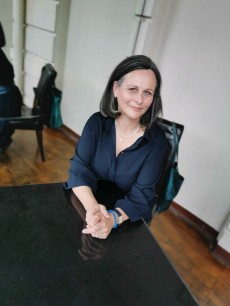 Rice noodles with herby sauce – I’ve been experimenting by eating more vegan food recently and I’m getting into good-quality olive oil and nuts. I know this is not everybody’s jam, but I’m loving it.