Who wants to stand around in the cold and wet watching dab squib fireworks? Stay in the warm, save your money and buy crime fiction books instead. And if you want some guidelines on what to buy, read our new issue! We seem to have a fair few police procedurals and long-running series up for approval this week.

Sharon Wheeler reports that Peter James's Roy Grace series is still as strong as ever with Dead Man's Time, thanks to assured storytelling and memorable cameo roles. Chris Roberts admits that Walter Mosley's Little Green - the 12th in the Easy Rawlins series - has rather a cartoon feel to it, with the extreme violence seeming a little too slick. But he praises the roller-coaster action and the wide cast of characters. Sylvia Wilson's eagle eye spots repetition of plot devices in Kathy Reichs's Bones of the Lost, but says the skilful writing and fast plot make it a good read.

Retired lawyer Linda Wilson mutters darkly about some dodgy legal knowledge in Leigh Russell's Stop Dead, but says the tale of a murdered businessman is a strong enough hook to hang a story on. And Jane Casey's The Stranger You Know scores highly with Linda for its ability to develop characters in DC Maeve Kerrigan's fourth outing.

Linda, who's been busy this week, praises the way that technical details are melded into the plot in Everyone Lies, the first book in a police procedural series by A D Garrett (who is a writing partnership of a thriller writer and a forensic expert). And John Cleal overcomes his dislike of Scottish noir to assure us that Michael J Malone's A Taste for Malice with its dysfunctional cop hero is a compelling, if uncomfortable, read.

Elsewhere, Sharon Wheeler is very taken with the sardonic Nordic Noir of Gunnar Staalesen's Yours Until Death, featuring Norwegian PI Varg Veum. Maddy Marsh says that Michael Koryta's The Prophet, where two brothers find themselves the focus of a killer, has a heart-stopping finale and captures small-town life perfectly.

John Cleal's a brave little soldier and reports that queen of the macabre Mo Hayder's Poppet is a cracking read - but not one to pick up before bedtime if you're of a nervous disposition! And John reckons that the usually reliable John Grisham has produced something which reads more like a draft proposal for a film script than a novel with The Racketeer, although he says it's one for light holiday reading.

Henry Sutton's My Criminal World has an usual premise where a crime writer's book interleaves with the real life of him and his family. Chris Roberts says it's a tad slow, but shows that crime fiction doesn't have to be about shock and blood all the time.

In the interview hot-seat this week is Håkan Nesser, whose new book, The Strangler's Honeymoon, published by Mantle is out now.  He has some intriguing drinking chums, plus some very varied destinations to run away to.

We'll be back in a fortnight for our fourth issue. In the meantime, make sure you check out the reviews from the other side of the Pond on Reviewing the Evidence.
Follow us on Twitter

as well. If you'd like to be added to our email distribution list for our fortnightly site updates, please contact us with your details and we'll include you. 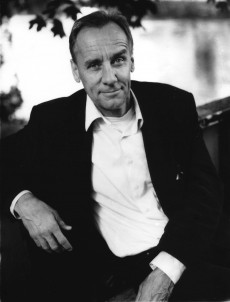 Håkan Nesser, one of Sweden's most popular writers, divides his time between Gotland and London, but has also spent time living in New York. His first novel was published in 1988, but he worked as a teacher until 1998 when he became a full-time author. He has received numerous awards for his novels featuring Inspector Van Veeteren, including the European Crime Fiction Star Award (Ripper Award) 2010/11, the Swedish Crime Writers’ Academy Prize (three times) and Scandinavia's Glass Key Award. His latest book, The Strangler's Honeymoon, is published by Mantle

Crayfish. Seven minutes to lay the table, one to get the bastards out from the fridge.