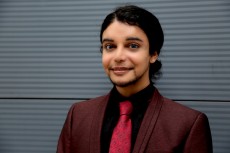 Muhammad Khan was born and bred in south London to Pakistani immigrant parents. His dad was a professor of linguistics who eventually retrained as a social worker. Muhammad attended a wonderful school in Balham then ended up at a less diverse school in Surrey where he was relentlessly bullied. He soon discovered that the only way to get his peers to see past his ‘otherness’ was to read his horror-comedy-detective stories out in class.

He graduated from King’s College London with a degree in engineering before immediately retraining as a maths teacher. If he couldn’t write for teenagers, he reasoned, then at least he could teach them.

Over the proceeding years, he realised his students worked harder if he made up short stories for them as treats. “You need to be an author!” they proclaimed. Encouraged by their generous words he composed a novel and submitted it to publishers.

Muhammad is now the author of two young adult novels: I am Thunder and Kick the Moon (Macmillan). His mind is still blown. All Muhammad’s books are inspired by the witty, smart and talented teens he teaches. In 2019 he graduated with a distinction in MA Creative Writing from St Mary’s University.

Ilyas Mian wants to draw comic book heroes rather than work in his dad’s shop but until he meets Kelly Mathews, Ilyas keeps his ambition to himself. Kelly understands him like no one else, but unfortunately, she’s attracted to Ilyas’ friend Imran, and doesn’t listen to the warnings she’s given about him.

Fifteen-year-old Muzna wants to be a writer. Her Pakistani-born parents want her to be a doctor. When the hottest boy in her new school starts to pay attention to her, Muzna can’t believe her luck, but all good things come at a price..