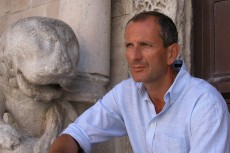 Gianrico Carofiglio is one of Italy's best known authors. He is also a member of the Senate in Italy and was an anti-Mafia prosecutor in Bari. He has been involved with trials concerning corruption, organised crime and the traffic in human beings. He has written crime novels, literary fiction and recently a graphic novel illustrated by his brother.

Reviewed on 25 January 2014 by Chris Roberts